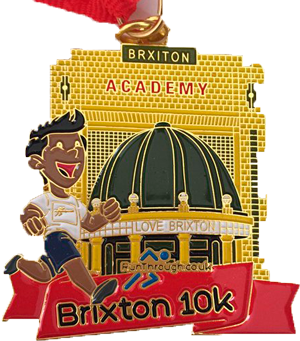 Users of Brockwell Park have reacted angrily to the conduct of a commercial 10km race provider in the park last Sunday (10 January).

A post on the Brockwell Park Community Partners blog says user groups had received complaints that the event, organised by RunThrough, resulted in:

The post also says that Run Through did not declare on its website that proceeds from the event were being donated to charity – despite the Lambeth Events Team recording the run as a charity event.

Participants paid £16 each for the sold out event for which they received a themed medal, water, fruit and flapjacks and kilometer flags. The medal managed to mis-spell Brixton – see top of image.

Matt Wood of Run Through said the organisers had been forced to move the usual start/finish area onto harder surfaces to ensure the already very wet grass from the recent bad weather was not damaged.

“We managed to do this despite the conditions, however we have met with the council events team and are working on an updated plan B for such weather conditions,” he said.

“We can only apologise for any disruption for the 90 minutes we were using the paths. We are always well staffed and had plenty of marshals in high-vis jackets around the park.

“We have had some lovely feedback from runners who enjoyed their day at the park. We have a good mixture of locals and newbies visiting Brockwell Park for the first time, many of whom will hopefully be back to run there again whether for training or racing.”

Wood said he had spoken personally to Lido cafe staff and they had not reported any abuse to him. “If there was, then I presume it was an isolated incident and we apologise on behalf of the individual in question.” He said.

“The Seaver Foundation, our charity partner, was clearly mentioned on our event entry page.”

He agreed there had been a lot of people in front of the Lido entrance, but said: “There was in no way a blockade. Again, our apologies if it inconvenienced anyone.”

He invited anyone with questions to get in touch via email at info@runthrough.co.uk.