As cold weather and Christmas turn minds to how to help others, Mark Wadie spoke to Brixton Soup Kitchen co-founder Solomon Smith about his passion for community work

“Brixton has always had a reputation for gang members, hoodies and drugs. A lot of people will play on it. But for me, it’s never been about that.”

Solomon Smith, 30, from Moorlands Estate, is sitting in a quiet corner of Brixton Soup Kitchen, with staff worker and good friend, Micah, 26, from Angell Town, (“We go way back, back to when we were skinny!”). The two are reflecting on the negative press coverage the area regularly receives.

“The media had a frenzy talking about girl gangs at one time,” says Solomon. “And what happens? Girl gangs start forming in response to get themselves on the news.

“I felt like I needed to say: ‘No, let’s be real. We are caring. We do think about others.’ We have found a way to have it. For a guy from Brixton to have formed all this is astonishing. And I’m showing a lot of young people it could be done. Put the back work in and it could be done.

“It’s all about that strong network, that strong connection. If it wasn’t for people like Micah, we wouldn’t be here today.”

Solomon seems to have known where he was headed from the day he sat down in his bedroom and drew a spidergram with all his interests on it, and concluded that youth and community work were where he belonged.

Solomon’s parents were both in community work. He said: “My mum helped to open up a nursery. She was always caring for people. For me growing up and seeing that was important.”

After leaving school at 16 with no qualifications, Solomon eventually secured a place at university on the basis of practical work experience, and graduated with a 2.1 degree in Youth Work.

Brixton Soup Kitchen began in the winter of 2012 to 2013, a particularly cold year.

“People died on the streets that year,” says Solomon. “I sat down and said, if people had clothes, something warm in their bellies, they would have survived. That’s when I texted everyone I could think of and said, I can come and collect clothes. Within an hour my car was full.”

Whilst dropping the donations around for those sleeping rough, a woman asked if they had any tea. “That’s when we bought the flask,” he says, pointing to a big flask on the table in front of us. “That flask is what started it all off.”

They were serving 40 meals a day within a month, helped by donations from Greggs, Nando’s, Pret, and M&S.

Today the soup kitchen sits at the Dominoes Community Centre on Coldharbour Lane, and offers more than just food.

Solomon explains: “For us, food is good. But that is the facilitator, to draw people in to chill. We ask people: ‘What put you in that situation, and how can we help you to help yourself?’ We have computers and internet, allowing us to get people back into work.

“We help people to claim housing benefit, to claim Job Seekers Allowance. We are a referral agency. We can refer people to the right services, like MIND for people with mental health issues. We facilitate things.” 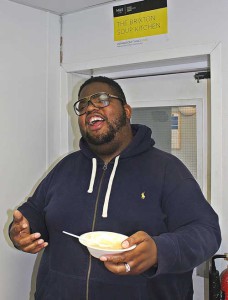 The soup kitchen has maintained its independence, without any support from government or other charities, relying instead on donations from private individuals and companies happy to let Solomon and his staff run things as they see fit.

He believes this to be one of the secrets behind their success: “It’s good in a way that we have not had funding. We are not told how to spend our money.

“When I look at other organisations, I always see this is where you are going wrong. When I look at food banks, for example, I see that they are not engaging with people, all they are doing is giving out food. A lot of places say – what area are you from? Well, we can’t deal with you because it’s not in our jurisdiction. That is WRONG!

“Our clients say: ‘Why didn’t you ask us where we’re from, or for a referral?’ I say that’s not what we are about. Everyone has a basic need to eat. That’s it!”

Solomon has a restless intelligence and is involved in many enterprises, including music, events, community work, and buying and selling cars.

His charisma made him a critics’ favourite on ITVs BBQ Champ (“I just wanted to promote my soup kitchen!”), and a strong marketing instinct has helped grow BSK’s Instagram and Twitter presence to over 30,000 followers.

He featured in the Evening Standard’s Progress 1000 list of the capital’s most influential people, rubbing shoulders with luminaries from the world of politics, sport, film and music.

Typically, Solomon and BSK don’t want to confine their work to Brixton alone. They are keen to spread it wider and regularly organise outreach expeditions to other areas of London, Brighton and Luton.

BSK is raising money for a vehicle to make them more mobile.

You can donate at gogetfunding.com/mobile-soup-kitchen-van.

Lambeth community stands side by side after Brixton Kwame murder