Local restaurants Llewelyn’s, Salon and MEATliquor have all signed up to StreetSmart – the annual restaurant campaign that fundraises for homeless people – to raise money for Brixton Soup Kitchen this Christmas.

Since 1998, StreetSmart has raised more than £8.2 million for homeless projects across the UK through the simple idea of adding a voluntary £1 pound to diners’ bills during the festive months of November and December.

Tom Muddimer, assistant manager of Llewelyn’s on Railton Road by Herne Hill station, said: “It’s such a diverse area – and we have poverty literally on our doorstep. StreetSmart is such an easy thing for our diners and us to contribute to: the £1 is barely noticed.

“The fact the money stays local means we can all see the difference our support is making.”

“It started after giving coats and clothes to homeless people and it grew organically into a soup kitchen overnight,” say Solomon Smith and Dr. Mahamed Hashi, founders of Brixton Soup Kitchen.

Smith and Hashi, both born in Brixton, were initially sceptical about StreetSmart’s engagement, fearing it was just another empty promise of support.

“My first thought was ; ‘not another one’ – as we’d had so many empty offers. But Glenn (director of StreetSmart) seemed different. He asked us: ‘What do you need’,” says Smith.

“We didn’t believe it when the first £5,000 cheque arrived and we were able to purchase a van for the kitchen. StreetSmart made people believe in us and they opened the floodgates for real donations.”

We didn’t believe it when the first £5,000 cheque arrived

Brixton, and surrounding areas of Wandsworth, Lambeth and Croydon, were recently ranked among the top 20 areas across the country with the highest rates of homelessness.

It is now estimated that over 300,000 people are currently homeless across the UK, with London boroughs at the forefront of this increase.

Hashi explains the local statistics on why funding is especially needed in South London: “27% of local people are living below the poverty line – that’s 83,700 people. One in three kids here are born into poverty. We have the highest rates of youth violence and mental health problems in all of western Europe – so much negativity.

“StreetSmart is a positive way to support the community. We’ve built such strong relationships with local restaurants like Salon who have helped us since the beginning.” 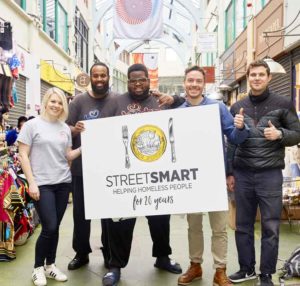 StreetSmart, Brixton Soup Kitchen and the local restaurants are all connected by the ethos of sharing good food.

Nicholas Balfe, the head chef and founder of Salon, is inspired by this and has supported Brixton Soup Kitchen for the past five years.

“It’s great to be able to share good food with those who really, really need it,” he says.

“Homelessness becomes a lot more pertinent at this time of year. It’s getting colder, the nights are drawing in.

“Life for many at this point in time is about indulgence and sometimes it’s good to remind ourselves of how privileged we are to be able to do that and in doing so, support those in our area who need a helping hand.”

Brixton restaurants participating in the campaign this year include Champagne & Fromage, MEATliquor, Salon, Upstairs and the Elm Park Tavern. The Palmerston, Platform 1, Franklins and The Rosendale in East Dulwich are also participating, as well as Llewelyn’s and The Florence in Herne Hill, and Joanna’s in Crystal Palace.

They are part of a wider family of more than 500 restaurants across the UK that take part in StreetSmart each Christmas.

MEATliquor, which will be re-opening in Brixton this week after being Chickenliquor, has raised record levels for StreetSmart since it signed-up in 2012. In its first ever month of the campaign it raised £10,000.

Sophia Browne, the operations director of MEATliquor, said: “It’s fantastic that the money stays local. StreetSmart isn’t just another faceless corporation; we can see the real impact of it in our local community. It’s now just part of our Xmas spirit.”

The campaign runs from November 1 to December 31.