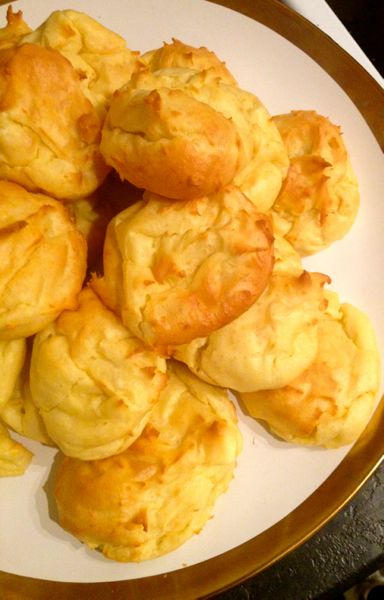 When you think of things for Christmas, what do you ask for? Because I’m a massive Irish stereotype, I wish for more potatoes. There’s literally no such thing as ‘too many potatoes’ in my world, but because I’m nice like that, I’ll share some of my spuds with the good folk of Brixton.

And because it’s Christmas I’m going to give them to you in the form of an easy, yet impressive party snack and I’m going to combine them with choux pastry for a little luxury. Usually known as pommes Dauphin, these are double carb heaven.

I know you are panicking about choux pastry being tricky and I’m here to tell you that it will all be fine. Choux has a bad reputation but is just as misunderstood as the average teenager. It just likes to feel like you are paying it attention.

You can make it up to 8 hours in advance and simply cook the puffs when needed. Pommes Dauphin are traditionally deep fried but I baked these and preferred them as they were lighter, fluffier and easier to eat more of.

Potato Choux Puffs (makes up to 30 depending on size)

Start with your mashed potatoes. Peel your spuds and cut each one into eight pieces, cover with cold water and bring to the boil and cook until just soft enough to mash. Drain well and return to the hot pan and allow any excess water to evaporate. Mash well without adding milk or butter as you want a drier mash for this recipe. Set aside until needed as it’s best to work with it cold.

To make the choux pastry, put the butter, milk and water in a heavy saucepan along with the salt, pepper and mustard powder and heat it all until it comes to the boil and the butter is totally melted. As soon as it hits boiling, add the flour and beat well with a spatula until you have a ball of dough that pulls away from the side of the pan. It’ll need a bit of elbow grease but stick with it.

Take the pan off the heat and tip the dough into a large bowl to cool for a few minutes. At this point, put the ready made mashed potato into the pan you used and beat one of the eggs into it.

After 5 minutes, beat the remaining three eggs into the cooled choux pastry one at a time. I usually use an electric whisk for this, but frankly I’m feeble. The first egg will make it look like a curdled mess to begin with. Be brave and keep beating until it combines. By the third one, your choux will look glossy and elastic.

Now beat your potatoes into the choux until completely combined. I added half at a time to beat it well and keep the air in. Either set the choux aside til needed or start spooning it onto a baking tray you’ve lined with greaseproof paper straightaway. I used a dessertspoon and got about 30 puffs. They will spread slightly as they cook so don’t pack them too tightly together.

Bake the puffs for 25 minutes in a preheated oven at 180℃. Usually when you bake choux pastry you want to dry it out to be able to fill, but here you want to get the outside crisp and golden and keep the middles soft and melting so don’t overbake.

Serve as soon as possible as they are best warm but are still pretty irresistable after they’ve sat for a while. They’ll flatten out a bit as they cool but don’t worry. I snaffled the last two the next day alongside a bowl of soup for lunch and they were great.

I did think they’d be excellent with a bit of parmesan added to the potatoes if you were being decadent. It is Christmas after all…

MEETING: Get involved with the Brixton Blog and Bugle

May edition of The Brixton Bugle newspaper out now