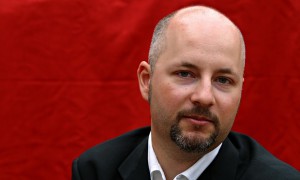 In his letter Toby Litt quotes his recent interview with author Neil Gaiman, published by the Guardian: “Here’s what I found the most persuasive thing he said – ‘For me, closing libraries is the equivalent of eating your seed corn to save a little money.'” He goes on to state Lambeth’s Council’s “greater responsibility for the long-term future of Lambeth” urging them to consider the impact of decisions and cuts which will very seriously undermine them.

Speaking explicitly about Lambeth’s proposal to re-purpose library space as gym facilities, Toby writes: “The people who will use the privatised spaces with which you propose to replace the libraries are already well served. They do not need new gyms – they may find these new gyms quite convenient, but they will not find them life-changing.”

Toby’s argument joins many voices from the community, including from Lambeth UNISON, who are outraged at proposals to reduce Lambeth’s library service.

Films from your libraries

Lambeth Council helps out The Gunman