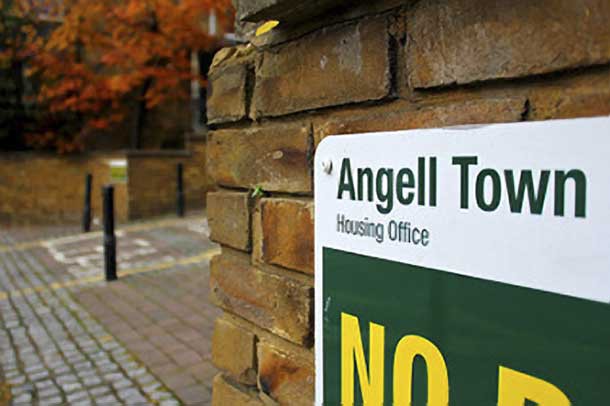 As many of you have seen, the Evening Standard has been running a series about a week in the life of Brixton’s Angell Town estate concluding today Friday October 2. It’s been an interesting and enlightening read, not least because as a resident of the estate for the last 10 years, there’s a lot I didn’t know and a lot I also can’t relate to.

To be clear, reading the piece, my neighbours would consider me ‘Brixton New York’ compared to many of them. I don’t have to worry about crossing Stockwell Park Estate or going to Windrush Square. I’m white, middle class and university educated and in many ways not who people expect to find living in a council estate in Brixton with a notorious reputation and that affords me vast amounts of privilege.

You’d think that what happens in Angell Town barely affects me but in fact like every resident it impacts me daily. I moved here in 2005 after being homeless because of long term ill health issues and living in hostels for a year. Lambeth Council had under the pressure of residents of Angell Town regenerated the estate and were eager to house people into the new buildings and a new community free from the notoriety of the area of the 70s and 80s.

On a personal level, moving to Angell Town was lifechanging. I went from wondering if I’d be sleeping on the streets the next day to a warm, comfortable flat with a secure tenancy for life. I was able to concentrate on my physical and mental health and rebuild my life after a traumatic few years. I was able to develop a relationship with Brixton, carving out friends, places to shop and eat, volunteer work in the area and writing for the Brixton Blog and Bugle and even creating a book about the area. I feel like moving here allowed me to make a success of my life in London and feel safe and secure. I’ve never even had an issue getting cabs here.

But I’ve never managed to build a relationship with my estate. I feel quite literally on the periphery of it. This is partly because unlike many of the tenants, I didn’t grow up here and without the trinity of school, church and kids it’s tricky to meet anyone beyond my immediate neighbours. However in 10 years, there has never been a neighbourhood shop, a takeway or a community centre to facilitate that interaction.

As the Standard points out the estate is built in such a way to isolate it from the other housing around it and from Brixton itself. There’s no bus stop, no seating and no green space in the estate for people to use rather than pass through. Even the bits of Max Roach park that border it are designed for passing through. There’s no sense of a centre or a heart to the estate and the optimism of the regeneration is declining with each year.

These cumulative day to day issues were not mentioned in the main Evening Standard pieces which for human interest reasons and a certain amount of sensationalism concentrated on the gang issues in the area. These are undeniably a problem that blights the life of those affected and cripples the opportunities for a generation of young people growing up here. But the wider issues of the estate were tacked onto a follow up piece that was hard to find in comparison.

While I’m aware of those issues living here, I feel very safe even walking round late night as a woman on my own. The estate is very quiet and the young men who hang around with only a dilapidated basketball court as somewhere to congregate are generally not antisocial or inconsiderate. People are houseproud and the area looks welcoming unlike the Standard’s suggestion that all you would notice are bullet holes and deprivation.

It’s an area filled with people doing their damndest in tricky situations and I was furious to see the Standard fail to make reference to the wider societal issues except to pointedly ask why so many families on the estate are single parent households.

The series seemed to suggest that the issues of Angell Town were both unique to it and in isolation to Brixton’s gentrification and Lambeth Council and London and the fault of the people living there rather than the consequence of wider policies and problems. I felt it did the community down and damned it with faint praise instead of saluting the effort people here do make. It also let Lambeth Council and the Met Police off the hook by not asking what the authorities are going to do to allow  people the chance to improve their situation.

Angell Town has problems, but it shouldn’t have to count negativity and poverty tourism amongst them. It’s a good place with good people and it deserves more opportunities than that series suggested. I’d invite our local representatives to speak up for us now the issues are becoming more widely known and remind the residents they are supported and respected.

Do you live in Angell Town or are you one of the many people who have lived there over the past 40 years? What do you feel about it now or in the past? Share your experiences below.