The founder of the Brixton Soup Kitchen has described his appearance on the Evening Standard list of most influential Londoners this year as “an amazing experience”.

Solomon Smith, 30, who set up the organisation in January 2013, was awarded a spot on The Progress 1000, the Evening Standard’s celebration of London’s most influential people, alongside other charity workers and campaigners, which included Greenpeace UK Executive Director, John Sauven, and comedian and activist Russell Brand.

The list, which celebrates the capital’s “innovators and progress makers” is voted for by writers, editors, critics and experts across a wide range of fields.

Smith said: “When I saw who else was on the list … wow, to be there was just amazing.” 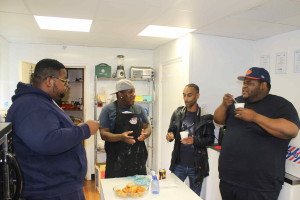 Brixton Soup Kitchen was set up without any backing from the government or other charities, relying solely on public donations and volunteering instead.

Smith said: “We are inspiring young people and the community, and people outside of London who have set up their own soup kitchen.”

They now provide up to 40 meals a day for the homeless and those unable to provide food for their families.

The charity is more than just a food bank though and Smith said: “For us the food is good, but it is just to draw people in. Then we can ask: ‘What put you in this situation, and how can we help you to help yourself?’

“We have computers and the internet now, allowing us to provide help with CVs and get people back into work. We can help people to claim Housing Benefits and JSA, and refer people with mental health issues to Mind.

“For a guy from Brixton to have formed all of this is astonishing. And I’m showing a lot of young people it can be done. Put the back work in and it can be done.’”

Brixton Soup Kitchen is currently raising money for a van to make them mobile. You can donate through their Go Get Funding page.

Eating out in Brixton? Make sure you’re StreetSmart this Xmas