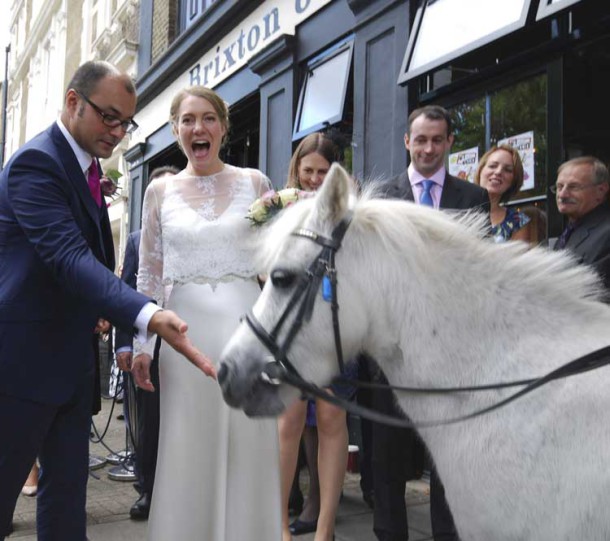 Brixton’s favourite Shetland pony was out and about on Friday when he greeted newly-weds Emily Georghiou and Glenn Pougnet to their reception at Brixton East 1871.

Pedro, from the Ebony Horse Club, is already a YouTube star with more than 350,000 views, thanks to the club’s campaign to fund a stable door he could see over – he is only eight hands (84 centimetres) high.

He demonstrated his temperament by keeping calm during a long wait on busy Barrington Road as the bride and groom were delayed in traffic. His groom, Chelsea Hughes, led him to a nearby patch of grass every now and again.

Letty Porter engagement manager at Ebony Horse Club, a friend of the couple, said the club is now up and running after its summer break.

Emily and Glenn live in Herne Hill. She is local influencing adviser for Age UK and deputy chair of Lambeth and Southwark Mind, based on Brixton Road; he is managing director of the charity streetsmart that signs up restaurants to add a voluntary £1 is to a diner’s bill during the festive months of November and December, all of which goes to charities for the homeless as streetsmart’s cost are covered by sponsorship.

This weekend: Portrait of a south London era