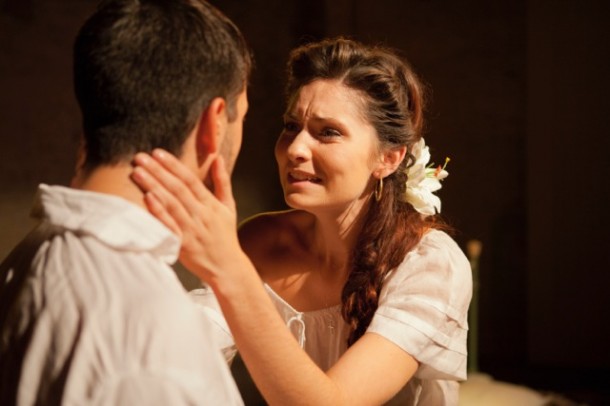 A play about a surreal artist needs a surreal setting. Nestled under a railway bridge, the venue Brixton East, a former furniture warehouse has become the home of Olives and Blood, a play on run here until November 10. The rawness of Brixton East seems perfectly juxtaposed against the flamenco music invitation being performed by Spanish guitarist Maria Camahort. The roots of Brixton meet the roots of Spanish culture.

As soon as you walk in and are greeted by the friendly steward you know that you will be rewarded for braving the chilly evening. Director, Prav MJ has pulled out all the stops to ensure that this is more than just a play, this is an experience. Music, food and drinks have all been themed. It is these little touches that make this a unique evening. Brixton East is a great venue. It has a refined character. It is like a hipster who has managed to stay hip even though everyone has copied his beard. The lighting, managed by director Prav MJ, is beautifully dark. It captures how each character is under the spotlight of history. The intensity is sporadically ruptured by the rumblings of the trains outside, a reminder that life goes on elsewhere. But for now we are lost to Spain. 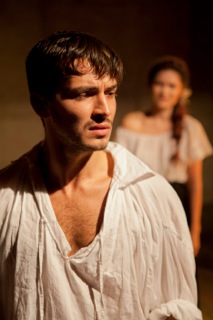 The play tells the story of the assassination of the Spanish poet, playwright and “the nearest thing to pure genius” Federico Garcia Lorca. (A quick history lesson-) Lorca was murdered by the Franco regime in 1936 and his body has never been found. But it is about more than just this one unlawful death. Using the technique of flashbacks, the playwright Michael Bradford cleverly charts how the death of Lorca defines the life of one of those involved in his murder, Trescante, who we meet forty years later. Trescante has spent the intervening years bragging about his involvement in silencing Lorca’s “voice”, and playing up his role in the Nationalist militia. Yet by the end of the evening, I was left feeling just as much pity for him as they feel for Lorca. It was a disturbing feeling, one that is no doubt entirely intended. Through the mixture of history and fiction, this play has a point to make. And it makes it in a superbly unsettling way.

The acting by all involved is passionate, yet not over the top. “Lorca’s women” played by Melissa-Kelly Franklin and Alice Pitt-Carter deserve much praise. They add personality and moments of humour to the dark and intense subject. Unlike the male characters, they perform the play in Spanish accents. This really helps to set the scene and is a continual reminder of the historical base of the play. Louis Labovitch shines as Lorca. He manages to get to the core of the character. And yet he does not overshadow Charlie Kerson, playing Trescente. He believably portrays the character as a man of dignity. Which is alarming as we know that he is capable of unlawful brutality. Trescente could easily have been portrayed by Bradford as a pantomime-esque villain. Instead, one feels like a voyeur witnessing the internal conflicts and destruction of Trescante. It is frustratingly heartbreaking. Morally we know that we should feel no pity for this person. Here is a man who was involved in the murder of others during the Spanish Civil War. Yet it is in his utter belief that he acted rightly and saved Spain that we end up pitying him. For unlike Lorca, he was dead long before he ever reached his grave. In contrast, Lorca’s creative works are still alive long after his murder. Bradford’s playwriting is completely compelling.

The play never loses sight that it is a drama, not just a mere historical tale to be told. Lorca’s life gives it a poetic base, a doorway into something larger. But it is through the action and relationships among the characters that the echoes of history can still be heard. Yes, sometimes the big questions that this play demands seem overwhelming. But, it never strays from being true to the essence of the story that it is trying to tell. Bradford never preaches. He just reminds us that we are never far from the effects of history. And we are never far from being human. For even in contemporary society there are those that remain deluded by their own actions and beliefs. It is a provoking commentary that there are those who still try to crush creativity and the human soul. The threats remain. Yet art remains a totally worthy counter-balance to such terrorism. Life and art, like Lorca and his genius, go on. And you should go to. Go to see this play. You won’t regret it.

Olives and Blood is on at Brixton East, Barrington Road, until November 10. Tickets cost £5 or £10 and can be booked via www.olivesandblood.com.

WHAT’S ON: The Weekend ahead in Brixton