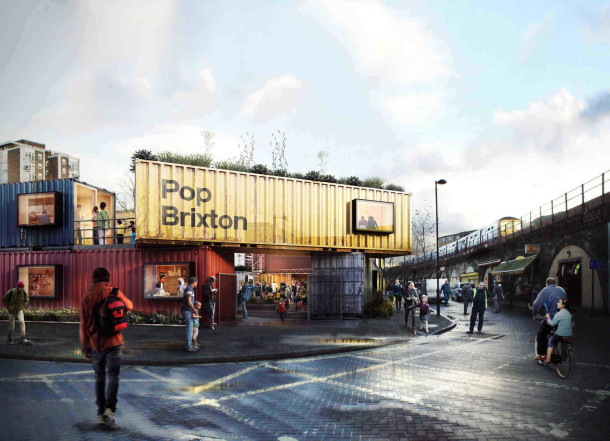 By Rebecca May Johnson

Henry Dimbleby and Jonathan Downey’s new mega gastro-enterprise London Union positions food markets as the saviour of “derelict” neighbourhoods with the alleged aim of bringing “communities together” and “breathing new life into dark spaces.” It plans to open 20 new markets with each one “designed to reflect the community it serves.” London Union appropriates the language of workers’ struggles and uses the hashtag #jointheunion online.

A quick glance at the last five years in neighbourhoods targeted by street food entrepreneurs, however, proves that existing communities in real need are the last people to benefit from street food markets (read: not at all). In fact, the arrival of a hot new food market has so far been a guarantee of social cleansing, council tenant evictions and a feast for property speculators.

Brixton is a textbook example and I was part of it. Back in 2009, living for “mate’s rates” at my friend’s house in Brixton, we rejoiced at the new, cheap restaurants that opened in Granville Arcade, recently rebranded as “Brixton Village”. Encouraged by Space Makers, an agency who were paid to help develop the market, landlords allowed temporary free tenancies for restaurants. Unsurprisingly, just after the financial crash, applications for spaces flooded in. It was the eve of the tidal wave of specialist coffee / burger / posh chicken restaurants. We drank cheap wine and hung out in the semi-open space of the covered market. It felt like the Berlin I had known in my year abroad in 2006 and not like the corporate London of endless Starbucks and Zizzi chains. We invited friends from other parts of town to come and partake of the new fun in Brixton.

The initial buzz gained momentum, aided by mouth-watering Instagram images – including those posted by me. More places popped up, queues formed, the BYOB policies ended, TimeOut made a video tour of the market, and “Champagne and Fromage” moved in – a restaurant that unwittingly became the poster boy for Brixton’s gentrification. There was a “turning point”, when I recognised some boys from the private school next to my comprehensive in rural Suffolk in the market one night, drunk on Red Stripe and loudly singing a grime song in a badly copied south London accent into a microphone. It made me cringe.

Middle class twenty-somethings I knew (my peers, let’s be honest) were bought flats in the area by wealthy parents, now that Clapham had become unaffordable and “boring”. I overheard conversations on the Victoria line, where Brixton converts enthusiastically informed hesitant friends that the area was “OK now”, before listing the market’s best restaurants and naming other (white, wealthy) friends who had recently moved there, as proof.

Meanwhile, Brixton was becoming a lot less hospitable for other people, namely, many of its existing residents.

The cultural capital and hard cash brought in by the fashionable food businesses made the area attractive to property speculators and caused market landlords seek to raise rents. Nour Cash and Carry was dealt a 22% rent rise that would have forced them to close, had not fierce campaigning put a stop to it. Long standing favourite Kaff bar is the latest victim of hiked up rents, and will serve its last drink next month. Other favourites to close include the bar and restaurant Mango Landin’ which will soon be turned into flats.

As a direct result of the roaring success of the market, Lambeth council, impoverished by cuts from central government saw the size of their property assets in the centre of Brixton skyrocket. The council has evicted hundreds of long-standing residents from council residences and short-life housing, before selling them off to developers or dubious private finance initiatives that never replace as many council homes as they demolish.

Network Rail is cashing in too, with forced evictions of long-standing shopkeepers, many of whom have had their businesses there for 30 years or more. Under the claim of “urgent maintenance” for the arches (which has seemingly become urgent because they didn’t bother with it when it was mainly poor, black people living and shopping in Brixton) Network Rail are forcing traders out. Rents will be tripled after the work is finished, effectively wiping out existing businesses, making way for the likes of Wahaca who, ominously, have opened their first site opposite the condemned arches.

So, who do street markets feed, other than food entrepreneurs, who aspire to build chains from their start-ups, and sell them off to venture capitalists and, of course, the ‘foodie’ middle classes?

Honest Burgers has sprouted into a ubiquitous chain since it opened in Brixton Village in 2011, and raised £7 million earlier this year. Franco Manca, founded in 2008 now has 10 venues all over town and sold for £27.5 million this March. Fair enough – both of these places serve excellent food – but it is hard to see how they function for social good where Brixton needs it most.

In what seems like a gross misjudgement on the part of Lambeth council, POP Brixton, consisting of a ‘village’ of brightly painted shipping containers, was given the use of the council land for free until 2017 when the site will be redeveloped — on the promise that it would provide benefits for the community.

Originally POP was going to be run by Edible Bus Stop, but after relationships broke down with EBS unhappy with the way things were going, the council forged ahead and brought in creepy sounding company “The Collective” (again, appropriating socialist rhetoric) to co-run the project.  “Tenants have been selected based not only on the quality of their offer, but also to maximise benefit to the local community” – says the press release. Seriously? A visit proves that it is nothing less than a theme park of fashionable food, from pinxos to ramen noodles, with zero visible benefit to Brixton residents – other than a few new flavours for those who can afford it.

Very few of the small food businesses themselves will make the kind of money that Honest Burgers are seeing and their staff work for low wages often on zero hour contracts. The issue is at the level of council planners and property developers – who, Dimbleby declared in an interview in the Evening Standard, should seek to work with “London Union” to liven up spaces where major development will take place.

Locations targeted by food markets almost always coincide with major development that eventually evicts poorer residents and ushers in the wealthy. The shipping container market on the site of the recently demolished Heygate Estate in Elephant & Castle is an unconvincing attempt to create buzz around the new identikit flats and to distract from the forced exile of thousands of council tenants. Streetfeast in Dalston, Kerb in King’s Cross and Riverside Feast at Battersea Powerstation all sprung up where councils have sold off tranches of land to speculators. All the “home-made” aesthetic of the food markets has done is to veil crass, big bucks development while it’s underway, or to increase the value of land.

The proliferation of food markets and of gastro-entrepreneurship in London has taken place alongside the rise of food banks and the numbers of those going hungry. More food markets does clearly not equal fewer people going hungry.

How about some food planning in Brixton that does some genuine social good, like community kitchens that work alongside foodbanks to provide free or cheap hot food for those who need it as well as much-needed social interaction?

I love a juicy chuck-steak burger in a steamed demi-brioche bun as much as the next red-blooded woman, but let’s not mistake eating one for an authentic commitment to social change.

Rebecca tweets at @rebeccamjohnson and you can see more of her work on her website here.

POP Brixton opens applications – and hopes for a hotel