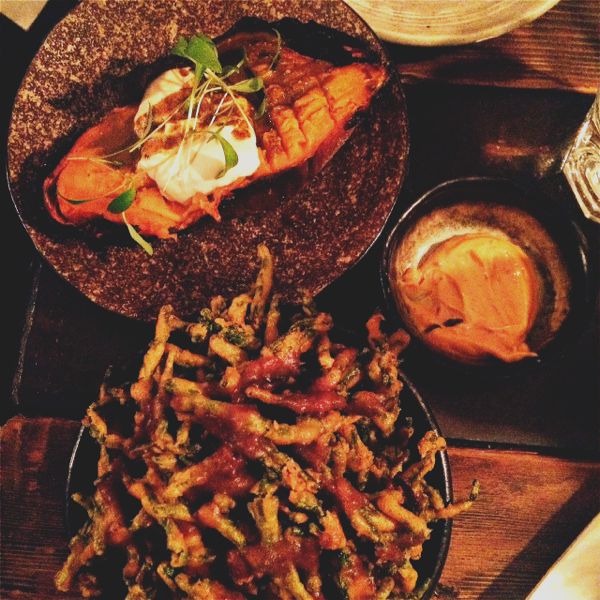 Nights out as a couple are rather rare these days when you factor in the noisy toddler, the bottle refusing baby and fairly epic levels of general tiredness. But when a friend’s birthday plans were cancelled last minute we found ourselves with a Friday night babysitter and nowhere to go. This could mean one thing only: DATE NIGHT.

My priority was alcohol. Lots of it. The husband’s was being able to sit down.If we were to step away from the comfort and convenience of a full wine fridge, a 9pm bedtime and several episodes of The West Wing we needed to be inspired.

After much debate and googling of options we decided on a rather reckless approach of heading to Pop Brixton and seeing what happened, with an aim to try Kricket (for the sitting down bit) if we could get a table. These crazy levels of spontaneity meant a smear of red lipstick later and I was running out of the house still wearing a Star Wars t-shirt and a teething necklace. It felt like one of those unexpected drunken student nights out when you go to the bar in a jumper and roll in 2 days later wearing someone else’s clothes. We were thirsty, we were out of the house, Pop Brixton needed to deliver.

On arrival the place hummed with promise. A good scattering of happy customers, but short to no queues and plenty of food and drink options to whet appetites and whistles, from Baba G’s Bhangra Burgers to Made of Dough pizzas and more.

There was a bit of a wait for a table at Kricket so we put our names on the list and sought out drinks. I had a couple of lovely Sauv blancs from The New Zealand Wine Cellar, and the husband went for a nicely hoppy Brixton APA from the Brixton Port Authority. I grabbed us some pork gyoza from Koi Ramen for some stomach lining, and at £2.50 for 3 (or £4.50 for 6) I could have eaten a dozen. I’m a bit of a gyoza fanatic and these were more than up to scratch. 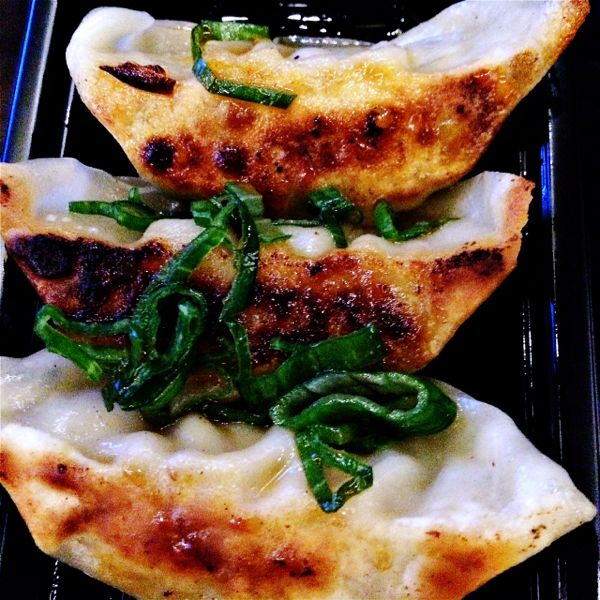 Before we knew it Kricket was calling and we headed to their little space on the upper level. A handful of diners share two long tables and we’d not been sat for more than a minute before our neighbours were giving us all their dish recommendations, which was basically everything. The concept is Indian tapas, so we chose 5 plates from the small menu.

We started with samphire pakoras with chilli garlic mayonnaise and date and tamarind chutney. Crispy, salty and very moreish, they were the perfect texture opposite the second arrival of grilled sweet potato which was soft and creamy and smothered in cooling labneh. Then came venison rump with pumpkin pickle, burnt onion raita, jerusalem artichoke and morels which was exquisite, the meat incredibly tender and the accompaniments so good we actually had to mop up the remains with fingers to get every last smudge of flavour. 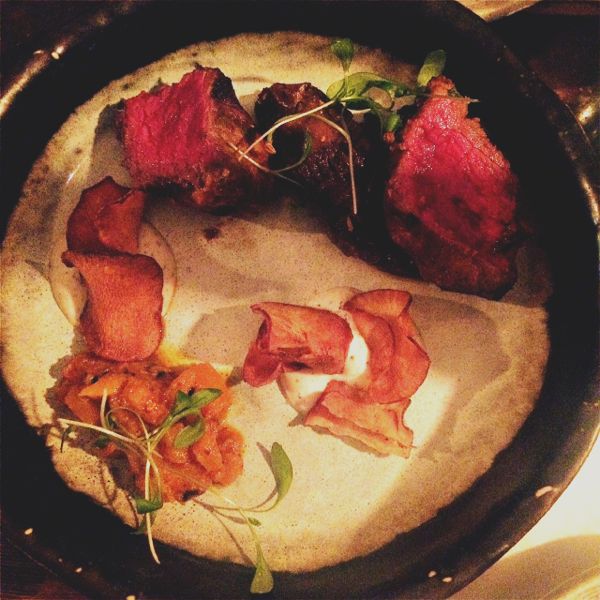 Keralan fried chicken was next, nothing not to like here, and then a comforting kichri – smoked haddock, yellow moong dal, pickled cauliflower and a raw egg yolk, which, when mixed through added another layer of warmth and richness. All this washed down with a couple of pale ales (him) and lagers (me), and for less than £60 in total. 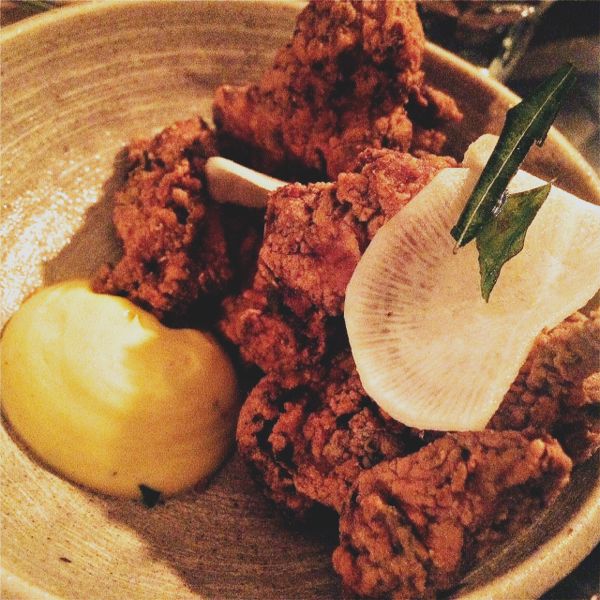 In the spirit of our Pop Brixton outing we decided to head back downstairs tothe open space for afters where the funky brass band were now playing. Some lovely gins for me and Peckham Pilsners for the husband, and for something sweet we indulged in crepes from L’Amuse Bouche for a bargainous £3.50 each.

I opted for Nutella, which was lovely, but the husband made the better choice of salted butter and caramel which was phenomenal and what I urge you to plump for.

We wobbled home full, drunk, and very pleased to have opted for something more exciting than just the local pub. Yes it’s a little bit chilly, yes you have to stand up at times, and yes you have to wee in a shipping container, but hey, it’s not just dinner, it’s an adventure.

For more from Christina you can find her here:

Fowl Play: Other Side Fried

The Brixton People’s Fridge is ready for take out