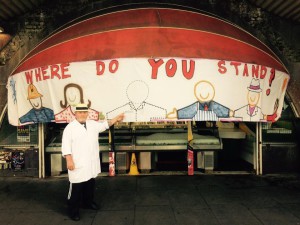 New banners are up on Atlantic Road as the shopkeepers threatened with eviction continue to fight for their right to remain in Brixton.

Mash & Sons fishmongers have put up a new sign – after their first one was mysteriously taken down – directed at Lambeth council which says “Where do you stand?” and paraded it in front of the town hall this morning.

The signs are in protest at Network Rail’s plans for refurbishment of the arches and consequent eviction of the businesses who operate there. 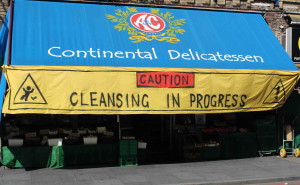 Over 30 businesses will be evicted while the work takes place and once completed tenants will face rent increases, which many will be unable to afford.

Local businesses who have operated there for decades are likely to be replaced with big chains who are able to pay the hiked up rents.

The Save Brixton Arches campaign has vowed to fight the evictions and has received a lot of support in the local community.

Tonight Brixton Buzz is holding a fightback concert at Electric Brixton to raise money for housing campaigners, including the Brixton arches.

You can also sign the petition to support affected businesses here or donate to the Save Brixton Arches campaign here.