Glasgow based  Collective Architecture was founded to pursue themes of participation and sustainability in architecture. They have exhibited in the UK, Barcelona, Chicago, and Venice, but from the 18th-21st of June for the London Festival of Architecture , a team from the award-winning collective came down to Brixton to host  Home from Home, a small exhibition in the temporary open studio space of a container at Pop Brixton. Arts and community reporter, Gargie Ahmad was there.

The exhibition was received well and  as Michael Dougall, one of the architects hosting, tweeted later on Saturday, ‘the people of Brixton have been so engaged with architecture and our open studio over the last 3 days I have now completely lost my voice.’

Home from Home was part of the Royal Institute of British Architects (RIBA) London open studios programme, with hubs in north, east, west, and south London inviting people to see work behind the scenes, and engage with architecture through discussions, exhibitions, installations, seminars, workshops and beyond. Each practice curates their own programme, responding to the overall theme of this year’s festival, Work in Progress. 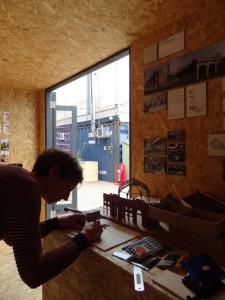 Home from Home featured a collection of drawings, models, and photographs of five of Collective Architecture’s residential and community projects, under themes of re-using, re-cycling, re-connecting, re-establishing, and re-populating. All these projects contribute to wider work in progress within different regeneration neighbourhoods across the UK. Architects Fiona Welch, Michael Dougall, and Nick Walker were on hand to give me a creative consultation around the container.

This plan for September 2015 is for a new riverside entrance and atrium for the Briggait Creation Centre. A former fish market in medieval part of the city, this is Glasgow’s first dedicated public base for dance, and the first purpose built accessible space for disabled dancers, and home to circus, physical theatre, street arts, and trapeze acts.

With site start in September, this is a redevelopment of three high-rise blocks to the Passive House standard. This stands for energy efficient design that delivers comfort and quality, being both affordable and ecological at once.

Due for completion in April 2016, this will be a new business facility for social enterprises in the site of a former community centre, building on the networks of the past to make connections for the future.

Due to start in spring next year, this new mixed-use development of residential flats and retail space hopes to make the best use of light in the heart of North Cheam, breathing fresh air into the public realm. 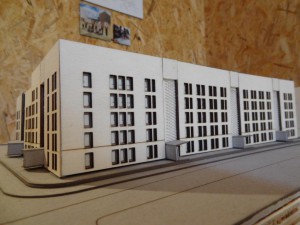 In redevelopment of the city centre, tenement style blocks surround a route reconnecting the Anderston area with the West End of Glasgow. The project has been shortlisted for ‘Affordable housing development of the year’ at this year’s Scottish Design Awards.

Follow Collective Architecture on Twitter to learn more about past and present projects, and find out more about London Festival of Architecture here. Pop Brixton is also hosting RIBA London’s summer showcase of member’s works, on until the end of June.

Only in Brixton: Learn to be a scaffolder in prison

Fowl Play: Other Side Fried