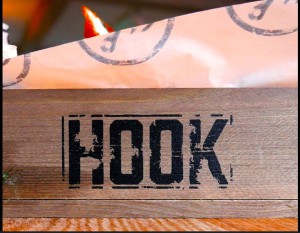 As a lawyer (I’ve been living in Brixton for a dozen years, so don’t start) I must first declare an interest. Barry the co-founder of Hook Brixton gave me two thirds of a bottle of cider for free. I guess technically he also gave me half my meal free as I was eating during a soft opening with 50% off food. However, in defence of us both, he didn’t know that I was intending to write a review and I had already decided that they were unquestionably a good thing.

To an extent they had me at fish and chips. I’ve been saying to my partner Ms Hexham for some time that Brixton’s culinary excellence is missing only a really good fish and chip place. I was therefore desperate to try it out and when I went on a Thursday lunchtime I wasn’t actually intending to write a review. I was just hungry. I deliberately chose what I feared might be the most gimmicky thing on the menu: the jerk seasoned hake. It came with their twice cooked chips, chipotle sauce and I ordered a side of mushy peas and nice cold bottle of Urban Orchard cider – it was a hot day and I was still in a suit.

Even taking into account the fact that I was well disposed, it was an impressive meal. So impressive I immediately wanted to tell people about it: hence this review. Fish first. The hake was moist but perfectly crisp on the outside. I was guzzling it down a little too quickly to be sure whether it was a crumb or batter, but I’m leaning towards crumb. Either way it was incredibly light. I guess the spice addict in me was expecting slightly more kick from the jerk seasoning, but I think that would probably have served as a distraction from the fish. Similar concerns probably prevented the chef from making the chipotle sauce too fiery.

Certainly in this dish the fish deserved top billing. On the wall they proudly proclaim that the fish are fresh from Cornwall. I asked whether this was from Billingsgate – let’s face it it’s the easy way to get fresh fish for a London restaurant even if it means getting up early. In fact it comes from the Flying Fish Company in Cornwall who specialise in supplying the London restaurant trade and the fish will have been landed comfortably less than 24 hours before you eat.

The chips were also great. They came in many different sizes. There were really crispy ones. There were squidgy ones. There were others that were crisp on the outside but squidgy inside. We’re talking chunky skin-on chips/wedges/slices, none of your “fries” nonsense. The peas weren’t really mushy peas. I understand because people by and large don’t actually like mushy peas, whilst crushed petit pois with mint sounds altogether too pretentious. Ok, so it may have been garden peas, but they certainly weren’t the marrowfat peas you might remember from childhood. They were lovely. Enough moisture to make them spreadable, without making them sloppy or soaking the chips or fish. The freshness of the mint and the sweetness of the peas compliments the jerk seasoning perfectly. There was a small bucket’s worth which probably does for 3 of my 5 a day.

The drinks list has a deliberate accent on the local. As well as my Urban Orchard cider there was pretty much the full slate of Brixton Brewery beers and a few others. I didn’t look for wine but they could do worse than have a flinty white or even some fizz. It might risk seeming pretentious but the food is good enough to get away with it and if you serve your fish and chips in a little wooden crate, I’m guessing that seeming pretentious isn’t your major concern.

The portion size was impressive. I’m a greedy man and came away full. The peas in particular are definitely enough for two and possibly three people. There was a good slab of hake – I think an entire fillet although I’m not at all sure how big hake get – and enough potatoes to please the Irishman in me.

Whether the portion size is enough to offset the cost depends what premium you are prepared to pay for truly excellent fish and chips. I paid £6.50 for my food on the special discount. By any calculation that’s a massive bargain. Some people just will not want or be able to spend £10 for any fish and chips and £3 for peas. Whilst I can understand that, they are missing out. The dish I had was fish and chips elevated to a good restaurant standard and £13 for a good restaurant dish is pretty reasonable. Actually I’d go further than that. It’s very good.

So having had my cheap meal, I went to have a chat about it. I was struck by Barry’s obvious enthusiasm for the enterprise. Brixton follows restaurants in Brussels and Camden with a slightly more limited menu for the moment. However chatting about the food made me keen to try the mackerel which is to arrive soon and I’m almost prepared to cross to river for the Guinness and squid ink fish that Simon the other co-founder is apparently developing. (Though I’d probably rather go to the upcoming restaurant in Antwerp.) Curiosity satisfied I was just about to leave when I was offered the extra cider which Barry had been trying. I promise it’s not the reason for the glowing review.
Hook Brixton is on the upper level of Pop Brixton.

New farm and garden pops up in Brixton