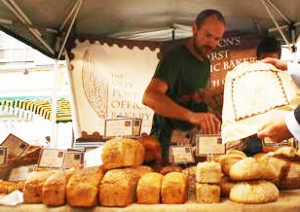 Customers have chosen The Old Post Office Bakery as the winner of this year’s favourite market stall at Brixton farmers’ market, run by London Farmers’ Markets.

The bakery was founded in the early 80’s, by Karl Heinz Rossbach who came to London from Berlin and found that it impossible to find the breads he had grown up eating on his family farm in Southern Germany.

He started to make his own bread at home and sold it to local shops. A the time he lived in a squatted building off Acre Lane that had been a Post Office.

He was later joined by John Dungavel and Richard Scroggs (the current owners of the bakery), both Brixton residents.

The organic bakery’s shop is now on Landor Road, SW9, and has a stall a Brixton Market every Sunday.

If it wasn’t for farmers markets, Richard says the bakery would have gone bust: “we used to sell to small Asian shops and health food shops, we sold a few loaves from the bakery and to Abel and Cole. Then wholesale got competative; small shops went out of business. Farmers markets came at just the right time and now they’re a big part of the business; the bakery shop expanded, as did our range.”

Richard adds: “It feels great, really honoured to be part of the market. It’s nice to be recognised.

“I’d like to dedicate our victory to all those small businesses fighting for their survival in Brixton. We’ve been part of Brixton for many years and we recognise that it’s the variety that makes Brixton the place it is. I hope that Brixton remains a vibrant place.”

Mario Schifano wants to create the best cocktail bar around. And why not? Hundreds of Brixtonians would say that he already runs the best...

From hoof to loaf – Brixton pupils see the start of...