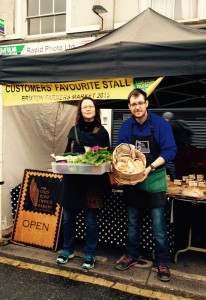 It seems every day that we hear of something in Brixton coming to an end, and the latest is the weekly Farmer’s Market.

London Farmer’s Market (LFM), who runs it, says that it is no longer financially viable to keep the market going and will hold the last one in Brixton on Sunday July 26.

Since 2009, every Sunday farmers, bakers and cheesemakers have been selling their produce there.

Richard Scroggs, who owns the Old Post Office Bakery – the winner of this year’s favourite stall at Brixton Farmer’s Market, said the proposed closure was a “terrible shame.”

“It’s bad for us, personally, as it’s a good source of income but it’s also sad news for Brixton. Its one of those things, even though Brixton is becoming a foodie destination, the businesses that have been operating here for years aren’t really benefitting.”

Mark Buttery, a regular to the market, said it seems “a decision has been made without considering all the potential options and the impact on the local community.

“Have you seen how busy the market is? One stallholder said Brixton Market was the busiest in London! Surely a solution can be found?”

LFM said in a Facebook post: “We have increasingly found it difficult to improve customer numbers or increase the variety of stalls on offer at Brixton. Sadly we have therefore had to take the decision to stop running the Brixton Farmer’s Market.”

Cheryl Cohen, who works at LFM, said: “We have had difficulty keeping the number of stallholders there.

When somebody leaves its very hard to replace them. There are people who’ve been there a long time and do well, it’s just difficult to keep the numbers up. I’ve met with Lambeth’s street trading team and all stallholders have been written to. It seems the council’s rents are set and nothing can be done.”

“I’m hoping that someone, either stallholders or local people, will be able to take it on but we can’t continue.”

“The council has been talking to the existing traders to see if there is the opportunity to take on the running of this Sunday market themselves, but it’s too early to say if those talks will be successful.”