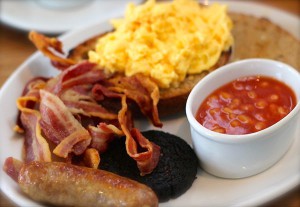 How did Mark Muldoon get on with breakfast at The Lido Cafe? Did it leave him cold as the water in February or was it a walk in the park?

Spare a thought for our beloved Brockwell Lido during these long, cold winter months. Plenty of us just sort of forget it’s there each year, around the start of X Factor. It’s a different story during the preceding months of course: throughout the summer the local landmark reaps great riches from the steady stream of South Londoners that think paying £5.95 to swim in an unheated outdoor pool represents reasonable value for money.

The Lido’s café (imaginatively titled ‘The Lido Cafe’) faces a not dissimilar problem: much of the pleasure of the venue is in spending the summer months dwelling on the terrace, smugly overlooking proceedings in the Lido. In the winter, said terrace appears to be – perhaps sensibly – off-limits, which means you’re not given the opportunity to sit back and watch anybody being daft enough to use the pool anyway. It’s difficult to put a finger on where these customers disappear to once Louis Walsh has popped back on our screens, but if forced, we might venture that the water temperature of 4°c on the day we visited may provide a telling clue. It’s cheering to note that the brave few for whom such conditions form no such barrier to entry have even seen fit to form their own support group.

On the crisp Sunday morning on which we visit, it’s the slightly less romantic surroundings of the café’s interior for us. There’s nothing wrong with said interior, giving the feeling as it does of walking into the tastefully curated front room of a well-heeled St. Martin’s College art student. And true enough, halfway through our stay the surroundings prove appealing enough for one twentysomething couple to check how easy it is to remove one of David Thompson’s gorgeous illustrations of the lido itself from the wall. (Top tip: not very.)

Serious about breakfast reviewing as we are, we’ve taken care to put ourselves in the position of the café’s target audience of Sunday morning breakfast customers – arriving with what I’ll scientifically term ‘70% hangovers’. More on those later, but first let’s analyse that target audience. Most of them, it has to be said, don’t make it as far as the seating area. Customers are turned away throughout our stay, advised they’d be well placed to book in advance next time they want a quality breakfast at 11am on a Sunday morning round this neck of the woods. The not-exactly-diverse 20 to early 30-something customers (more Herne Hill than Tulse Hill, with a light smattering of babies) are having their hangovers tastefully nursed by Bloody Marys and Elbow album tracks. Strong trade in kale, spinach, mango and basil smoothies however, at least suggests some people are managing to stick out their new years resolutions.

The Lido Café has in the past gained a reputation for oblivious service. One can happily report our visit to be sweet natured and pleasingly attentive, though it would take a visit at a quieter time of the week to check this wasn’t even partly down to a desire to get fresh customers replacing us as quickly as possible. The star of the Free Range Full English Breakfast is the sturdy, gratifying sourdough bread. The kitchen were perfectly happy to swap mushrooms for black pudding, somewhat raising the question of why anybody would suffer a breakfast which includes mushrooms instead of black pudding. The bacon arrived almost entirely without flavour, constituting the only major let down here. A graceful Eggs Royale was topped generously with smoked salmon, with one egg cooked to runny perfection and one slightly overdone. 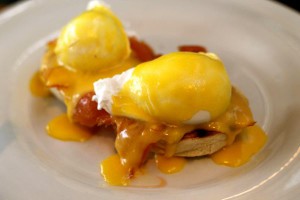 Returning to matters of science, now: for your £9.95, a Full English breakfast will cut a 70% hangover down to 45%, whilst at £8.50 an Eggs Royale will still leave you suffering at 60%. The truly beleaguered may wish to consider the weightier £11.95 breakfast offering instead, but it’s by no means a necessity. There’s enough charm here to warrant keeping the Lido in mind all year round.

Mark Muldoon is regularly this scientific about hangovers on Twitter @muldoon and in longer form here.