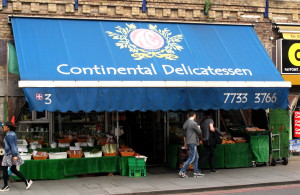 Tenants on Atlantic Road facing eviction have vowed to fight against the move.

Earlier this week Network Rail told tenants on Atlantic Road and Brixton Station Road, from Brixton Road to Pope’s Road, that they will have to vacate their premises within the next six months so refurbishment of the arches can begin.

They have offered them no guarantee that they will be able to return once the work is finished.

Ian, 62, who has worked at the fishmongers on Atlantic Road for 28 years, says the news has left everyone “stunned.”

“Its your livelihood, its what you do. They’ve offered us £1000 relocation cost, but we don’t want to relocate. We’ve been here since 1932. My father worked here for 55 years.

“They want to replace us with a River Island or a Morrisons who will pay the massive increase in rent once the development is done. But we are part of Brixton. The regulars have come up to me today asking ‘when are you going? what can we do?’

“We don’t know what’s going to happen but we won’t go down without a fight.”

Carlos, who works in A&C Continental Grocers, the deli that has been there for over 25 years, said: “Who are they doing this for? We’ve not interaction with Network Rail (apart from one letter) and they haven’t guaranteed that we can come back. I think that shows their intentions.

“Lambeth Council should do something, we’re part of the community. Brixton people have shown us great support in the last few days, hopefully the council will listen.”

Get out and sing to celebrate Windrush Day