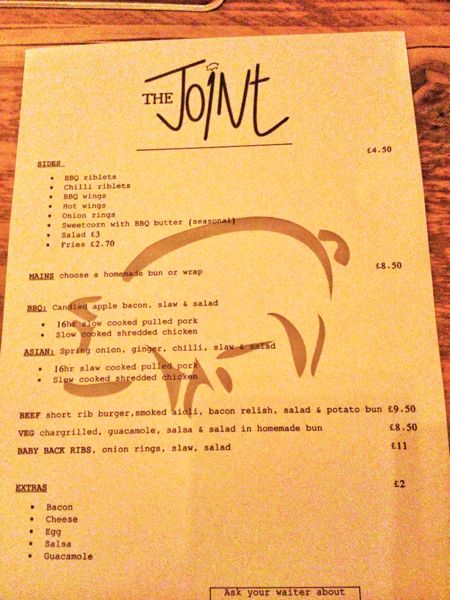 In the most recent instalment of our occasional series trying new branches of restaurants that started in Brixton, James Eaton samples The Joint now it’s up West too.

It is an undeniable thrill to watch somewhere you love develop and grow. When I first visited The Joint in Brixton it was a very stripped back and simple affair with a hand-written menu and upturned milk-crates for tables. It has since evolved into a vibrant and popular eaterie for all lovers of slow-cooked meats and zingy flavours (and pleasingly kept some of those milk crates). Indeed, since my last review I have even finally managed to get my hands on the giant chicken bun monster (or ‘panko fried chicken breast’ according to their menu) and delighted in my success – tender and juicy, perfectly cooked, the flavours of the BBQ sauce and coleslaw balancing out the meat and all crammed into a wonderful fig and vanilla sourdough bun. So so so so good.

A few months ago they tweeted a picture of a stall they were manning at the Marylebone Summer Fayre and the eagle-eyed amongst their followers noticed that the stall was set before a big shop front bearing The Joint’s logo and the tagline – ‘Coming soon’. This was news indeed. Over recent weeks pictures have been posted of beams being ripped out, ladders, brick dust, and all manner of work-in-progress updates before finally an image of the pig design that graces their menu appeared. But this was made out of metal and stuck to a wall. ‘Soon’ was becoming ‘not soon enough’ for some of us.

Excited as I was, I had to focus. Would the flavours still thrill? Would the ethos and enthusiasm translate to a more established site? Would the relaxed yet buzzing vibe find its way to Marylebone? Would I have extra BBQ wings for pudding? Basically – would The Joint work outside of Brixton? I have written a few pieces about places that have expanded from humble beginnings in Brixton Village and although they have not always been a complete success – I still hold my hand up and say I prefer the original Franco Manca to any of the other branches – it is clear that the rest of London is slowly being rocked by the Brixton world. (Honest Burgers are opening yet another new branch near Liverpool Street soon and, of course, Wahaca is branching ­in­ to Brixton). So with all this in mind, I visited The Joint in Marylebone on a quiet Tuesday in October…

First things first – it looks great – stripped back brickwork (but not in a pretentious, trendy, money-filled way), big wooden tables with ice buckets sunk into the centre, adorned with sauces and condiments, and a nice looking bar. The staff were friendly and welcoming and we decided to sit in a cozy corner where we could see the rest of the space and spy on what other people were eating. Some of the walls have splashes of hand-painted artwork and it is very clear that a lot of love and effort has put in to creating this place. The lighting comes from strings of bare bulbs which in a chain or concept restaurant may seem a tad tired, but here it more a case of giving the diner a little taste of the Brixton Village vibe rather than trying to be trendy. A nod to your roots is always nice and I have to say that The Joint seem to glory in theirs – it feels more refined and polished certainly but it is not trying in any way to shy away from where they came from.

The menu is similar with their trademark pulled-pork or shredded chicken, taking centre stage in either a BBQ or Asian sauce, served in either a wrap or one of those killer fig buns. The classic sides of hot or BBQ wings, ribs, and onion rings have expanded to include corn on the cob, salad, and fries – all served in paper bags tied up with string and a neat label. However, nestling underneath the usual mains, I noticed something else – a beef short rib burger served with smoked aioli, bacon relish, and served in a soft potato bun. Sold. Instantly.

I have never made it down to Brixton to try their beef specials and so this was something I simply had to have. Had to. Have it. I know I should possibly have gone for my usual BBQ pork bun to get a fair comparison but there was no chance here – it was too good an option to pass by. We also ordered some wings and ribs to get us going.

I have been championing the chicken wings at The Joint as the best in London for some time now – crispy exterior, butter-soft meat underneath that can almost be sucked away from the bone, tangy and zingy BBQ sauce (and the hot sauce is also pretty fine) – and these did not disappoint on any level. In fact they were gone in seconds. As were the ribs. And the second portion of wings. Any fears I may have had about the quality of food were disappearing as fast as our starters and leaving us covered in sauce at the same time. And such good sauce too.

Our mains arrived looking every inch the serious showstopper that the menu had hinted at. A towering creation of shredded meat piled high, relish and aioli creeping down the sides, a big hunk of salad, and a perfectly baked bun lid perched on the top. The portions were clearly not going to be any smaller than in Brixton either. That is a very, very good thing indeed. My first bite through the soft bun through into the vast, dense, rich meat was something magical – the beef was deeply savoury and perfectly cooked, the relish and aioli added a wonderful balance and sharp-yet-comforting extra flavour. It was simply wonderful. And gone in minutes – there was no talking, just eating.

When it was all gone and the few escaped bits of meat had been chased round the plate, I asked why they had veered away from the sourdough for this burger. As good as the fig and vanilla bun is, it seems it just didn’t work with the richness of the beef and the sweetness apparently washed away the other flavours. So they did a bit of workshopping and  created a simple, soft potato and olive oil bun to compliment it instead. Clever boys. 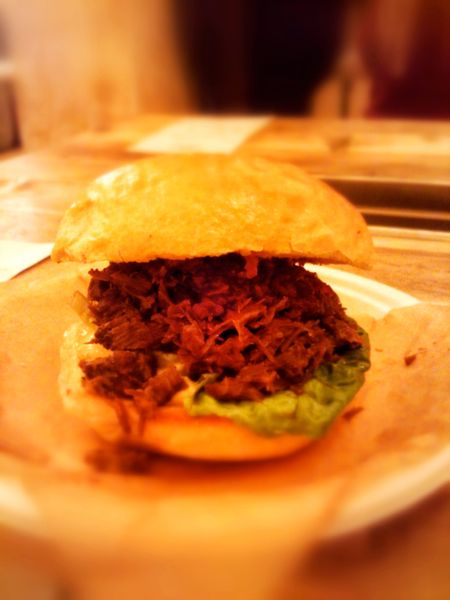 Unlike the original, there is a licensed bar at The Joint in Marylebone and the drinks include a couple of beers (from Brixton of course), red and white wine, and some exciting cocktails made with their own hand-crafted syrups so if you get there and have to wait at least you can while away your time in a booze-infused manner. Or soft drinks of course.

As it was the second night of opening there were a couple of little, niggling issues with some of our orders and the staff not quite knowing what to do but I’m not going to make a big thing about it – it’s a new place, they are new staff, and any problems that we did have were dealt with swiftly and professionally. And they were hardly problems that detracted from our overall experience or the sheer brilliance of the cooking.

I am truly impressed with what Daniel and Warren have done in Marylebone – it captures everything that is good about their original (and still very popular) site and expands upon it to create something that is truly special and a place that is a pleasure to eat. I shall certainly be back. And I think you should definitely make the trip up there too. And yes, we did have more wings for pudding.

James blogs at www.butisittasty.com and is on Twitter as @cradlefish 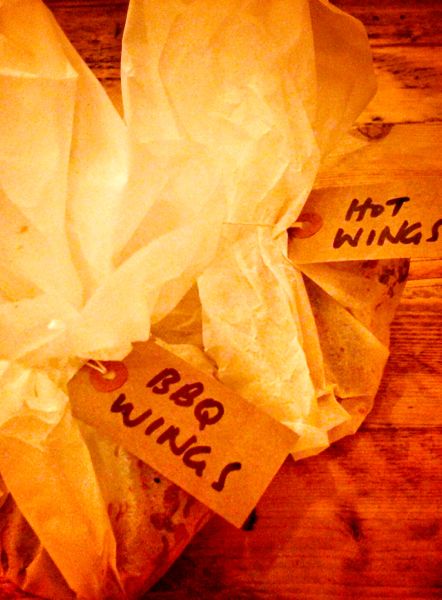