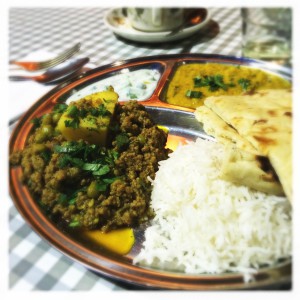 Friday Night in all its glory renders Brixton Village virtually unrecognisable these days. Queues run alongside daytime-only wig shops and grocery stores, music beats heavily, and giddy laughter echoes everywhere; it is quite a phenomenon. I am introducing it to my friend’s chilli-intolerant City-boy friend. He’s never been to Brixton in general, and I needed dining partners, so the two kindly trundle south to meet me after work, under the promise I’ve made that where we’re going will be rather delicious, his inability to eat spicy food decidedly ignored.

I had not been to Elephant before, shocking as that may be to you, dear readers. The general response from Brixtonites when I tell them this is “ohmygodhowhaveyounotbeenyet?” said with the faintest hint of wistfulness. The answer is I just haven’t had the chance. There are a lot of eating options around town these days, and I cook a huge amount, so visiting one of the main fixtures of the new faces of Brixton just hasn’t been a priority.

But it really should have been. The restaurant has a simple frontage, a tiny kitchen and fantastic wallpaper, with tables that flank two sides of 3rd Avenue; the menu is a simple offering of Pakistani street food: samosas, pakoras, curries and thalis. We were warmly welcomed, nabbed a table and prepared ourselves to start eating (and in City-boy’s case, sweating). We order vegetarian and lamb samosas to start, and one of each of the thalis for mains: chicken, keema lamb and vegetarian. There’s no liquor licence, so along with it came some marvellously spicy masala chai and a perfect mango lassi (it is also BYOB).

A thali, for those of you who do not know, is essentially a meal made up of a few dishes. Elephant’s come with a curry of your choice, fabulously garlicky daal, expertly cooked basmati rice, wedges of naan, any heat balanced out with cool raita, and fresh cucumber, onion and tomato salad. It is fully fledged, stuff-your-face eating, in the most welcome of senses. 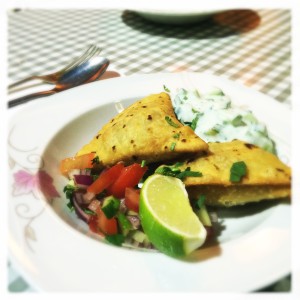 A departure from their crispy filo dough counterparts, Elephant’s pillowy samosas were lightly crunchy on the outside and full of flavour inside. Finely minced lamb had the slightest tickling of heat, was meaty and moreish. The vegetarian was a little less exciting with its filling of potato and sweet corn, though the accompanying raita and cucumber, red onion and tomato salads were easy bedfellows for both. This was boding well for what was to come.

Each of the thalis was tasty in its own way: in one, the chicken breast, cooked in a deeply spiced curry sauce, happily relented under the weight of our forks. Another offered richly seasoned and sauce-free minced lamb with peas, the taste hugely satisfying. The vegetarian cauliflower and onion thali was perfectly cooked. Both vegetables retained the best parts of their flavour and combined together brilliantly; it was the best of the three.

The food arrived quickly as Brixton Village continued to fill up with people. The queues outside the wig shop migrated to outside of Elephant and even though we’d just paid our bill, we were asked to leave so they could seat other diners. A partly reasonable request considering how busy it was, but part of me also thinks that this nighttime version of the Village is becoming more conducive to a conveyor belt style form of feeding people. Regardless, it is finally clear to me why people speak of it with such longing in their eyes. Go eat at Elephant if you’ve not been before. You won’t regret it, just don’t expect to linger.

Dinner for three including service £50

The rebirth of the Brixton Blog

Neighbourhood Forum hears from Sleepless in Brixton and Brixton Green