A magnet for alternative culture and self-expression over the years, Brixton is a natural home for street art. These last few years in particular have seen an explosion of weird and wonderful creations peppering our streets.

No longer the enfant terrible of the art world, street art has been ushered in from the cold by the mainstream, fuelled by the well-documented popularity of artists like Banksy.

It’s been a divisive transformation, creating opportunity for some but also crowding the market and introducing a new and not-altogether-welcome commercial hierarchy into the community. Sound familiar?

Street art grew out of the early 1980s graffiti boom, and a desire to take art out of the stuffy confines of traditional galleries. Since then, it has become a broad church, and now encompasses most imaginable types of (generally unsanctioned) art created in public spaces, including stencil and freehand graffiti, poster art, street installations and more recently things like video projection and yarn bombing.

Like most umbrella names given to artistic movements, the term ‘street art’ can raise artists’ hackles. Some reject both the label and its connotations. Still, the scene is thriving like never before.

Brixton and street art go back some way. During the eighties, the council took a progressive stance toward commissioning and encouraging the many murals which still adorn Brixton’s walls, in the hope of brightening up the area in troubled times. Sadly they didn’t plan for the maintenance of these urban treasures, something which the London Mural Preservation Society are happily doing a great job of putting right.

That legacy is now being preserved and added to by a new generation of artists. As well as the plethora of new works popping up around Brixton, there are other focal points, notably the legendary ‘Stockwell Hall of Fame‘. A run-down ball court in the Stockwell Park Estate, it attracts artists from far and wide – beginners and big names alike – who come to hone their craft legally and without the usual time pressures. Works down there change all the time, and the skilled graffiti writers have created a remarkable revolving door of explosively vivid designs.

These are just a few of the works lighting up the streets at the moment:

This vibrant piece on Solon Road is by Mike Ballard, perhaps better known to followers of street art by his alter-ego Cept. Mike/Cept has developed a reputation as one of the UK’s most intriguing artists, with a varied output that includes oil paintings, video art, conceptual installations and of course street art.

I put some questions to Mike about his work:

MM: We love this piece – what was the inspiration?

MB: It was inspired by the silver age of comics. I had drawn the characters a while back and was looking for a good place to paint them, alongside my name Cept. I like that it’s a couple together, looking forward to the future, but also looking quite retro. My whole vibe is future primitive. I love painting letters and characters on the street, always freehand, never stenciled.

MM: Could you give us an idea of how long it took and your process?

MB: The piece took me about two hours. I had a sketch, marked it out and my friend Kev helped me fill it in. I like the black fill in and lilac outline. I’ve painted over 2000 pieces in my 25 years painting graffiti, and I like to paint fast and capture the energy of the moment

MM: What appeals to you about painting in Brixton?

MB: I’ve always had mates who live in Brixton, so I visit a lot. It’s got a great feel and atmosphere.

MM: What role do you think street art has to play in local communities?

MB: I think the art on the street brightens the communities it is in, and makes the place more lively and colorful. It shows the city has some energy.

Find out more about Mike’s work at www.spradio.com and on @Ceptronix on Instagram.

This piece is the handiwork of Paintshop Studio, a local creative studio that mixes design and graffiti art for a wide range of projects. Here’s founder and artist Rick Walker:

MM: What was the idea for the piece on Mayall Road?

RW: It was a collaboration between me, Dep, and Tizer who at the time worked with me at Paintshop Studio and lived just a few doors down the road from the piece.

This was just painted for fun, we are always on the look out for new painting spots and after a quick chat with the owners of the warehouse we got permission.

I loved the vintage typography on the top half of the shutters but the bottom half had been repainted and looked really tatty, so we wanted to try and find a way to work with what was there and still create something cool for all the residents who will see it everyday.

MM: Does it have a particular message?

RW: It’s based on climate change and is really just a light-hearted look at a serious topic; i.e. what happens when London is underwater. It was part of a theme we had been doing around the time which was also featured as an animated screensaver commissioned by PlayStation called ‘Peckham-on-Sea’. This piece featured a couple of fictitious locals as the water level rises. It worked nicely as we were able to keep the original character of the shutter and blend it with our design.

MM: How long did this one take?

RW: The Railton Road piece took a day to actually paint once we had the idea and had worked-up rough sketches. Once you have a plan then it’s a fairly loose process to bring it to life. You start by sketching the design on the wall with spray paint and working out what goes where. You then try and get the balance and interaction right between the characters, and then it’s a case of filling in the background and working in the details. The details are quite time consuming, as to get the nice colour blends and details it involves a lot of layering and ‘cutting back’ over the top to keep it tidy and sharp. I was painting a lot with Tizer at this time, so we were very used to how we each worked and the whole process was very fluid.

MM: What’s your view of Brixton as a place to create your work?

RW: I have a lot of love for Brixton and spend a lot of time around the area. Brixton has always been a key place for London graffiti and the Hip-Hop scene in general. Just down Stockwell Road is the Stockwell graffiti Hall of Fame which has been a mecca for graffiti artists for decades and has seen some of the most famous artists coming from all round the world to paint there. Its truly an amazing place and one of my favourites to paint in.

Find out more about Paintshop Studio at www.paintshopstudio.com.

This intriguing depiction of a bee has an important message at its heart. The bee population has been in mysterious and sudden decline since the late 1990s, which is a problem because because bees don’t just make honey, they pollinate crops and are key to food production. The threat to the bees is also therefore a problem for us humans. I spoke to the artist Louis Masai, who is also the man behind the giant rhino in the Duke of Edinburgh’s beer garden:

MM: Does your work usually have an environmental focus? What was the spark for this one?

LM: For the last year I’ve been painting endangered animals. I felt like there needed to be a bit more of a message behind what I was doing.

It came from a trip I made to South Africa, where I was part of a campaign to save the rhino. After working on that and doing smaller bits with bees, I thought it would be cool to do a bigger campaign.

MM: How is the campaign going generally?

LM: It’s going really well. It’s nice seeing people give a shit. Sometimes I feel like they don’t. I hope people actually are engaging, rather than just jumping on a bandwagon or because they just want to take a photo of it.

I hope it makes people think about the reason why bees are disappearing – it’s not just because of pesticides, it’s also because we don’t provide nature a home. That’s not just with bees, it’s with everything.

I’m not saying that that art can solve the problem, all I’m saying is that I’m an artist and art can raise a point. I’ve got Friends of the Earth involved, and they give out information on how to be more aware. I’m not an activist, I’m an artist.

MM: What made you choose bees in particular?

LM: The biggest chance to make an impact was with bees. We’re very selfish as a race, and if you tell people they’re going to die as a result of bees becoming extinct, they suddenly give a shit.

MM: Do you think more street art should be socially conscious?

LM: I don’t know. I think if you have too much of something, people become passive, they stop looking and they stop acknowledging. Ultimately, painting on streets does two things – either raises an issue or just beautifies a space, or it can be both.

In some respects I’m sick of street art, as a whole I find the scene incredibly boring. It’s oversaturated, too many people are doing it, too many people haven’t paid their dues. All these street art tours – it’s become a money-making machine. These people have diluted the term and made it into a business, and for that reason I don’t even consider myself a street artist.

MM: Why choose to paint in Brixton?

LM: Brixton is nice and something of an exception. If I’m doing work for my own enjoyment, I’ll go down to Brixton or somewhere else less saturated. There are less people doing it, therefore there’s more acceptance and appreciation of what other people are doing too and more respect generally.

Invader is a well-known French street artist, although his actual identity remains a mystery.

Living up to his moniker, he has launched invasions in more than 60 cities across 30 countries since 1998, always placing his distinctive alien creations in high-profile places.

He’s taken on London numerous times through the years, with Brixton coming under attack in 2011. As well this one opposite the Dogstar, a couple more of his cohorts are lurking elsewhere about Brixton. You’ll have to find those for yourself though.

This new piece on Brixton Hill is the work of Mr Cenz and Tizer ID, two local artists. Apparently, it depicts ‘the local community and elderly people as giants’ – a message I think we can all get behind!

* Since this article was written the works on Saltoun Road and Mayall Road have been painted over. 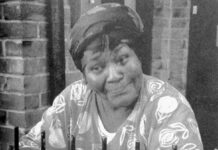 Help Pearl return to Brixton with a donation