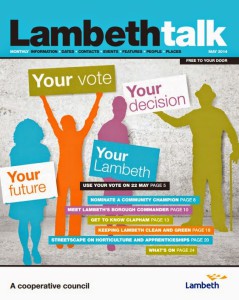 Lambeth council will press ahead with its monthly Lambeth Talk publication, despite being ordered not to by the Government.

Minister Kris Hopkins wrote to Lambeth in August warning them that the magazine, delivered to every household in the borough , was in breach of rules set down by the Department for Communities and Local Government (DCLG).

It has since emerged that the council has no intention of reducing the frequency of the publication, a move that opens it to further action from Communities Secretary Eric Pickles.

A council spokesman said: “Lambeth Talk plays an important role informing residents about council services and events. A point we have been keen to emphasise in discussions with the DCLG.”

In a letter dated August 15, Hopkins suggests that the monthly magazine, published by the council and delivered to every home in the borough, breaks rules set down by Secretary of State Eric Pickles limiting such freesheets to four per year.

The letter adds: “I would ask you to now take steps to ensure publication in the future will be in line with the Code’s provisions… Where the Secretary of State considers that there is a risk that in future a Council will not be complying with the Code he will be minded to issue, in accordance with the statute, a written notice of a proposed direction.”

The Publicity Code sets a range of provisions in relation to local authority publicity including the frequency, content and appearance of so-called taxpayer-funded “newssheets.”