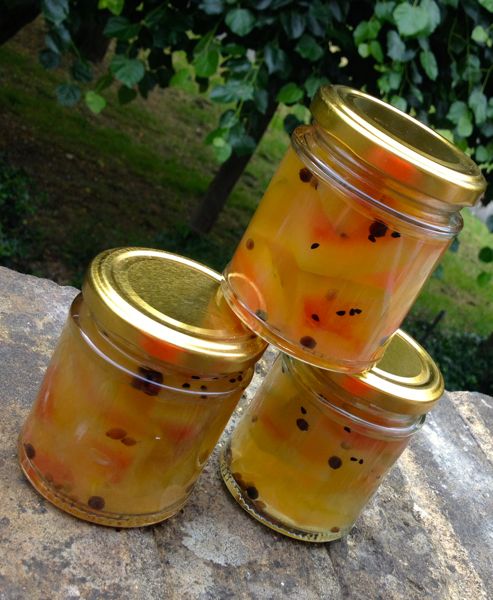 I bet you had no idea you could pickle the green rinds from the watermelon until now unless you happen to be from the Southern states of the USA and living in Brixton currently….

I discovered this because I’ve been buying so much watermelon recently. The stall under the on the corner of Pope’s Road and Atlantic Road by the Village is selling massive hunks of it for a mere pound and I can’t stop myself. (Nor can I resist the bargain cherries and flat peaches.) I felt wasteful simply tossing the rind in the bin as it doesn’t compost. So I was delighted to discover you can pickle it and end up with something as crunchy as cucumber but a little bit different for once.

These are very easy to make but like most pickles, they aren’t exactly fast. They take two days to make (ie: sit in a brine and then a syrup) and around 4 weeks to mature. This will take you to the end of the watermelon season and allow you to extend the craving for its flavour.

Begin by cutting the flesh away from the rind with a sharp knife. It doesn’t matter if you leave a little bit behind. Peel the dark green layer away with a potato peeler until you have a pale green rind. Slice into roughly 4-5cm pieces and set aside.

Make the brine by adding the 50g of sea salt in 600ml of cold water and dissolving it over a medium heat. Allow to cool and then pour it over the rinds. Leave them somewhere cool and away from cats or kids overnight or for 8 hours to brine.

Next day, drain them and rinse well. Set into a saucepan. Cover with water and bring to boil. Simmer for 10 minutes until slightly softened. Drain after 10 minutes and set aside.

While the rinds, make the pickling liquor by adding the 300ml water, vinegar, sugar and all the spices in a saucepan and heating it gently. Add the fresh ginger at this stage but don’t add the ginger cordial if using. Allow it all to heat for 10 minutes. Add the rinds to hot syrupy liquor.

Allow to sit and mingle all the flavours together for at least 2 hours. 3 is best. Bring the rinds back to the boil at this stage and simmer for another 10 minutes. Heat the oven to 160℃ and sterilise your clean jars for 10 minutes.

Spoon the hot rinds into the hot jars and cover with the hot liquid. Cover with the lids of the jars, but don’t screw them tight until cooled. Tighten the lids and store in a dark cupboard or the fridge for 4 weeks while the pickles mature. Serve with a feta salad, barbecued meats or on the side of a sandwich.

They are sweet, sour, salty and spiced and utterly addictive. I ate a whole jar in two days and used it as an excuse to get takeaway from Miss P’s Barbecue pop up at Market House between 5-10pm on weekdays. They made pulled pork interesting again!