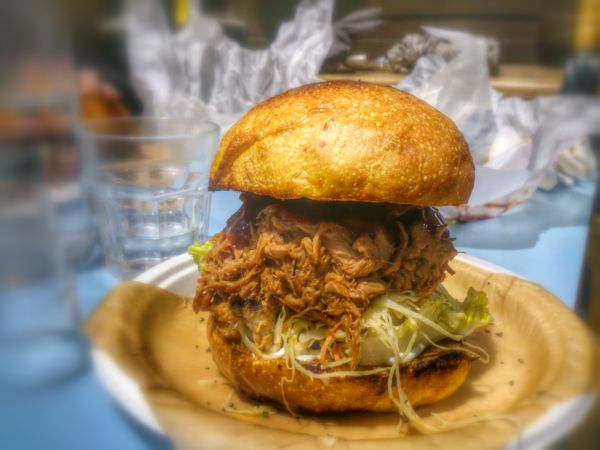 Pulled pork. It’s pretty much everywhere – from trendy burger bars to branches of high street sandwich shops, strands of slow-cooked, BBQ-sauce slathered, soft and tender bits of pig are being devoured on a daily basis. It’s not too difficult to work out why – you can make large quantities in advance, cheaper cuts of meat are ideal and if you don’t get it quite right you always either put it back in the oven/smoker or find a strong sauce to beef (or should that be pork?) up your flavours.

So amongst this sea of options, it is a credit to Brixton that some of the best pulled pork in the whole of London is served at The Joint in Brixton Village. Scratch that, I’m going to punt on it being the very best the capital has to offer. And I’m fully versed in some of the truly excellent options that are available – indeed, I urge everyone to explore them too (especially Miss P’s BBQ at Kerb King’s Cross).

The first time I visited The Joint, there was very little to suggest the amazing food that was to come – there were no menus just a couple of handwritten sheets of paper with tempting phrases like ’16 hour smoked pork’ and ‘fig and vanilla bun’ scribbled on them. Tables consisted of floorboards stuck on top of old milk crates and most of the seating was a stack of railway sleepers (which actually are still there but I’m not complaining), but the staff were smiling and friendly and the smells coming from the kitchen were tempting so I took a seat and ordered. And I haven’t been able to stop smiling about it since. A towering pile of delicate, full-flavoured pork with a zingy sauce, crammed into a sunshine-yellow bun with coleslaw, candied bacon, and salad. Just brilliant. And they provided enough napkins to help deal with the gleefully sticky mess that were my face and hands. Since then they’ve gone from strength to strength – a faithful legion of fans, more tables and chairs (and printed menus) and the occasional special. Not that I’ve managed to get down before the aforementioned specials have been scoffed…

I have eaten there several times – I think I’ve probably had everything on the menu – and I’ve never, ever had a bad meal. And that menu has been steadily expanded, offering traditional BBQ pork or chicken as well as spicier Asian versions of the same, served in one of those killer house-made buns or in a generous wrap. The sides of wings, ribs, and onion rings come tied up in paper bags and are ridiculously more-ish (indeed, on one recent visit, my companion and I ordered an extra couple of bags of wings in place of going somewhere for pudding) – smothered in yet more of that deliciously tangy sauce, brilliantly offset with a dusting of fresh mint. At my most recent trip down to the Village (just as spring suddenly turned back into winter), my wife was almost eclipsed by the towering and delicious BBQ vegetable bun which seemingly contained several whole peppers and courgettes – they just don’t do small portions at The Joint – and I was almost tempted to forgo the pulled pork and opt for the babyback rib platter. But I didn’t. I couldn’t. If they could just have kept the tunes down a tad when we were sitting outside the door though…

But that’s a minor, minor gripe.

Earlier in March, they announced that they would be open all day Tuesday to Sunday which is excellent news and to celebrate a picture of what can only be described as a giant chicken monster bun appeared on Twitter. Sadly, as ever, they’d sold out before I could get down there but I am assured it is on the cards to be a regular menu item soon alongside the prospect of beef ribs. Now that is something to get excited about. It gets busy quickly – especially at weekends – but it’s worth the wait and, like everywhere in the Village, blankets are on hand to help keep you warm on chilly days. Even if you think you’ve had enough pulled pork in your life, make room for The Joint, it’s worth the effort.

Zoe - 28 January, 2011 1
If you do one thing this weekend, let it be the 'Kalkata Street Food Experience' on Sunday and Monday at Whirled Cinema in Loughborough...

5 April, 2012
We use cookies to ensure that we give you the best experience on our website. If you continue to use this site we will assume that you are happy with it.OKPrivacy policy