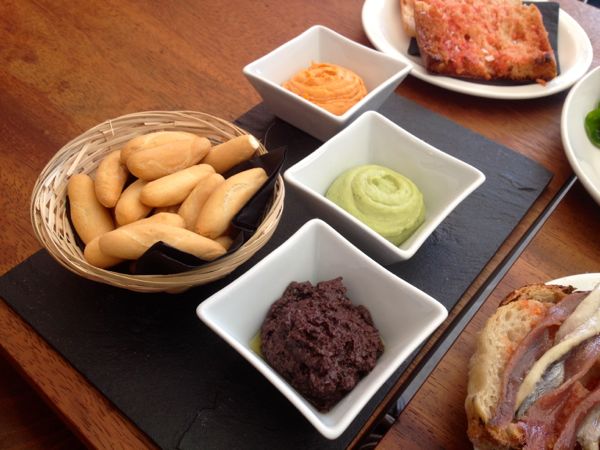 You may have noticed something stirring under the arches on Atlantic Road recently, Spanish food experts Brindisa have come to town. Their speciality food shop opened a few weeks ago and their cafe offering a selection of food, wine and sherries opened on March 14th.

South London’s Iberian and Spanish speaking population and many food lovers have welcomed Brindisa with open arms, but others in the area have been wary, believing it to be another sign of gentrification. I caught up with founder and local resident, Monika Linton recently to hear more.

It became apparent quite quickly that Brindisa is a more Brixton business than most people would have thought. Monika has lived in the area for 20 years and the warehouse for all Brindisa shops and restaurants has always been Lambeth based. Monika has been keen to open in Brixton for at least the last 5 years but has struggled to find the right premises until now.

All the staff at the Brixton branch, are local to the area and they bring a wealth of knowledge about both Brixton and the products they sell. I selflessly volunteered to sample some of the acorn-fed Iberico ham expertly cut by their carver Juan who understands the showmanship involved in good food and who was also happy to point me in the direction of cheaper shoulder cuts of cured meats or ham ends to suit my budget.

Brindisa isn’t cheap, because good food has value. Monika understands that in a market where you can get a bowl of peppers for a pound, it might seem extravagant to some to buy one of theirs for twice the price, but explains it all comes down to flavour and budget, but it is also personal taste. Good, well-produced food tastes better and Brindisa offers the opportunity to taste many products before you buy. Some people spend their money on nice cars, music, expensive shoes or holidays, while some like good things for their table. A little can go a long way if it has good flavour – that is the essence of traditional Spanish cooking.

Provenance is important for Brindisa, supporting small producers in creating the products, whether it is those sold in the shop or in the cafe. Recently opened, this isn’t the typical Brit take on the tapas bar but offering llesques instead. Often translated as ‘on toast’ it consists of variations on the classic pan coca tomato or bread and tomato that is a staple of Spanish cuisine. Using a variety of bread from Brixton bakery Bread Bread, you can layer it with the cured foods Brindisa specialises in such as meats, hams, anchovies, cheeses, salt cod and vegetables. There are also luscious charcuterie plates, cheese, salads and salsas to choose from.

When I ate there last weekend, we ordered a plate of Iberico ham, bread and a selection of salsas to dip into, the anchovy trio llesca and pan de coca tomato, thinking it would make a lovely light lunch on a sunny spring day. I think we over ordered since portions were so generous, I could have done with a nap afterwards!

The silky smooth slivers of ham were beautifully cut with a good amount for the money. The breads were chewily delicious and generously topped. As a fully fledged anchovy obsessive, the combination of marinated, smoked and cured anchovies was the ultimate in umami shared between two. The salsas were sensational, especially the almogrote which is a soft cheese, tomato and paprika dip from the Canary Islands.

The cafe at Brindisa will be open Wednesday to Sunday from 10 to 10 and it has plans for a breakfast menu as well. Alongside the food is a small but well thought out selection of drinks from sherries to beer and wines. We drank fantastic flavoured mineral waters from Spain and enjoyed a coffee as well.

Despite being the first full day the cafe had been open, it was buzzing with people popping in for lunch or simply to have a look round. Staff greeted everyone with enthusiasm, clearly keen to show off this new side of Brixton. With a head chef from Coldharbour Lane and staff who live within walking distance, you get a real feel of community connection here. They are keen for people to come to Brixton rather than rely on stereotype and second hand reports in the media.

I have to admit to being slightly sceptical about Brindisa opening here until I met Monika and their team and seeing their enthusiasm about the area and about quality food. Brixton is becoming trendy for food but it’s always been an area where people cook and appreciate the variety of cuisines and ingredients and Brindisa captures that along with opportunities for local people to build on their interests. Don’t judge until you’ve been!

I was writing this article anyway and planned to visit when the cafe opened but was a guest of Brindisa for lunch.