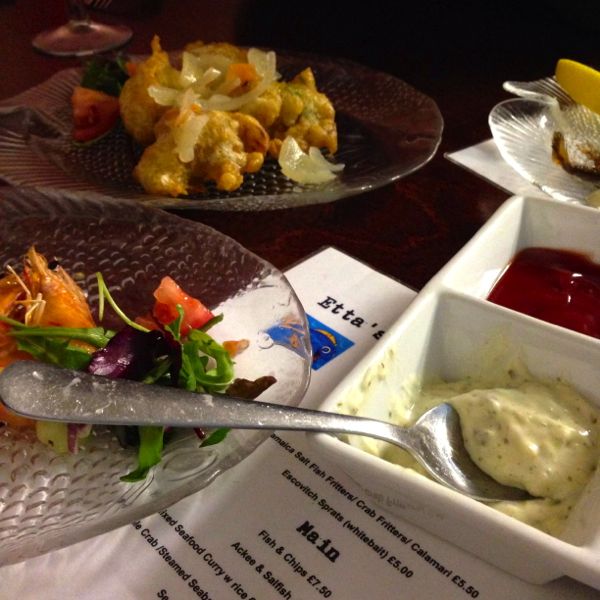 The popularity of Brixton Village grows and grows. From Clapham they come, from Vauxhall they come, from Streatham they come, and no doubt further afield than that. And then they queue. Long snaking queues, overlapping, intertwining, neverending. On a Friday night the snakes have no end, no beginning, and the chance of eating within an hour is slim. But still, they come. It’s infectious. A British peculiarity, perhaps. Drawn to the queue, despite the warnings. Waiting for an hour, waiting for two, sitting in a bar along Coldharbour Lane staring at the phone, willing it to ring.

Not this Friday though. Nope, this particularly Friday a plan was in motion. We wouldn’t queue, instead aim for a restaurant without the promise of meat by the metre and staff in skinny skinny jeans. Etta’s Kitchen sat almost alone in this respect, as did the only occupied table. An anomaly amongst the increasing stereotypes of the foodie scene, Etta’s greets the diner with a coat of light blue paint, happy smiling fish on the windows, and a menu promising nothing pulled, BBQ’d, or served with bacon. The staff were smiling too, hands free of the seemingly obligatory clipboard. It almost didn’t feel right. A gentle beat of drums reverberating through the wall the only indication that the Village still existed outside the door.

Refinement doesn’t feature in the Brixton Village lexicon and here is Etta’s connection to the surroundings. Wholesome no frills food in a relaxed atmosphere is their mantra; the kitchen and lone chef visible over a wooden counter, every table three steps or fewer from the hatch, and plates arriving when ready. We almost exhausted the list of starters with a choice of three. Whitebait, fish fritters, and king prawns, accompanied by various sauces. An absence of batter on the whitebait meant a crispy, sizeable fish to view, dunk, and eat in one go. Food to be played with – the child within likes.

Casting eyes down the menu and the choice grows substantially. Mains range vastly in price and for good reason. The £7.50 fish ‘n’ chips is a cheap ‘cut’ served with a salad. Fine, completely fine. The crab – a sprawling monster requiring such a tussle as to almost render the calories negative – twice the price. And then, for the same money as the crab, the whale arrives. Breaking the calm of the table and surfacing on a Olympic dumbbell of a plate, the sea bass is a true beast of the deep, served with vegetables and doused in curry sauce. This is ludicrous value. A piece of meat that would compete with Bodeans were it not for the lack of artery clogging fats. Easily a two man job and rendering the sides of dumpling and plantain needless, it’s a distracting main that has cameras flashing amid an atmosphere of serious food envy.

Drink is a low point if you want alcohol. With none available, whatever can be begged, borrowed, bought, or stolen from an off-licence en route accompanies the meal. Not easy if you haven’t studied the menu in advance. However, that’s one niggle of only a small handful. A world apart from the rest of the Village – space, seating, and food that leaves you fresh and not heavy – it’s lack of popularity on a Friday is not a reflection of taste, service, or quality, rather the expectations of those who pour from the Victoria Line wanting meat, meat, meat and more meat. 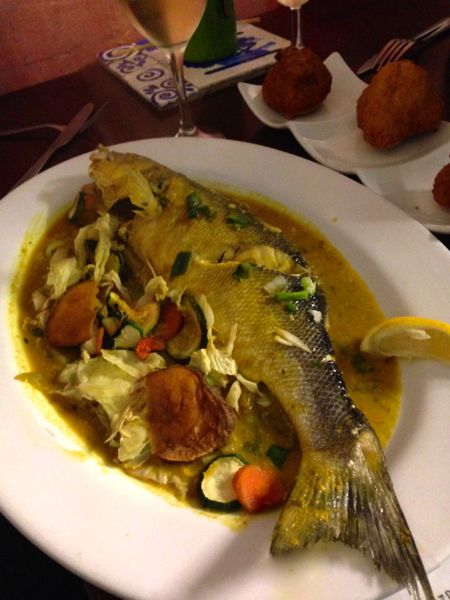 Nik blogs at http://conradsbeer.blogspot.co.uk/ and can be found on Twitter @NikSpeller

“I’m a Brixton girl” – new manager of Brixton Village is...