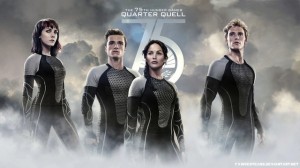 This week dystopian teens of an apocalyptic future get a bit rowdy and refuse to do their homework in the extremely popular The Hunger Games: Catching Fire, starring Jennifer Lawrence in the second instalment of the proposed trilogy.

But if you’d like to see the same scenario played out with less Hollywood gloss and more of an edge I suggest you check out the Friday’s late night screening of the controversial cult classic Battle Royale (2000). Brutal, shocking, and with an incredibly dark streak of irreverent humour it’s definitely one of a kind.

Andrew Bujalski’s Computer Chess has been doing the rounds at all the right festivals and is slowly but surely beginning to gain some kind of following. Filmed entirely with analogue Sony AVC-3260 video cameras to give it an authentic early eighties vibe (a similar technique that director Pablo Larrain used to great effect for the amazing No in 2012), the story follows a group of nerdy software programmers during a man versus machine chess tournament. It’s hip, it’s happening, it’s fuzzy.

In Fear is a new British horror that involves a young couple getting lost down dark, inescapable country lanes whilst driving to a music festival. Tension, paranoia and stark fear begin to set in as they find themselves being pursued by either a psychotic local or something far more supernatural. Pretty much sounds like most people’s experiences driving to festivals.

The highly anticipated and groundbreaking documentary Leviathan finally gets a general release and it looks amazing. Using tiny waterproof cameras strapped and clipped to every conceivable area of a commercial fishing trawler, Leviathan plunges the viewer deep into the unforgiving realm of the North Atlantic Ocean for what looks like an intense and immersive experience.

Also showing this week is Doctor Who: Day of the Doctor, in celebration of one Britain’s most enduring sci-fi creations reaching its 50th anniversary, and my all time favourite Walt Disney classic Jungle Book (1967) gets a Kids Club screening.

Peter Landesman’s Parkland takes a unique and interesting look at the J.F.K assassination, viewing it from the perspective of the general public and hospital staff, and Like Father, Like Son is the latest offering from Koreeda Hirokazu, the acclaimed Japanese director responsible for the excellent Still Walking (2008) and After Life (1998). Hirokazu’s film would be my choice of the week as it’s very rare that he fails to deliver the goods when it comes to highly original human dramas.

So there we have it, another week proving that cinema in all its strange forms is alive and well and living at The Ritzy. Now go watch some movies.