Developers have submitted plans for a market made of 13 shipping containers in a small patch of land behind the former Brady’s Pub in Atlantic Road, Brixton.

Guarav Mohindra, from Iridium Assets Ltd, has applied to Lambeth to develop the site, which would be known as “Brixton Yard”.

The developers claim the market would not include cooked food but dry goods like fashion and jewellery. It will include 30 units based in metal shipping containers, varying between 8ft and 40ft in length. The scheme  echoes a retail development called Boxpark in Shoreditch, east London.

The land was formerly owned by Transport for London, as it includes an air vent for the Tube station below, but Brixton Blog understands it has since been bought by Iridium Assets Ltd.

It has an entrance gate next to the railway bridge on Atlantic Road, and another on Electric Lane.

In a supporting statement to Lambeth council, a spokesman for Iridium Assets Ltd wrote: “The site is currently derelict. The immediately surrounding areas offer a diverse selection of shops and market stalls, which give this particular part of Brixton its unique and colourful character.”

They added: “The Yard would provide much needed extra space to the neighbouring Brixton Market, which is currently running to its full capacity.”

But current market traders have disputed the need for more market space. 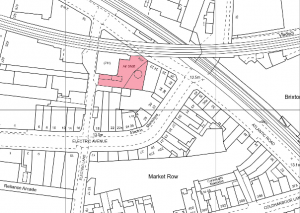 CEO of Brixton Market Trader’s Federation, Stuart Horwood, told Brixton Blog: “This is simply something that Brixton doesn’t need and I’d urge Lambeth not to grant change of use.”

He added: “The covered market may be full but the demand there is for restaurants and food. These guys want to have a trinkets and jewellery market – and the fact is there is already the outdoor market around the corner which is running at only 80% capacity. So there just isn’t the demand for this new market.”

The historic Brady’s pub is currently being developed into flats on the upper floors and the restaurant chain Wahaca is set to open on the ground floor.

The development of the pub, once called the Railway Hotel, came despite a long-running campaign by locals who wanted to take ownership from Lambeth council and run it as a community space.

Residents have until December 3 to give their comments on the scheme, and Lambeth council are set to make a decision over the change of land use to retail by January 7. See the planning application here.

What do you make of the plans? Leave your comment below or email us.

Wahaca is set to open in Brixton