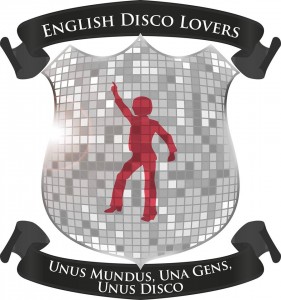 Last month Brixton Blog contributor Jen Ewbank met with English Disco Lovers founder Alex and one of his many accomplices – Tony Dunne (curator of their upcoming Brixton club night) to discuss the rapidly growing movement they’ve started and how local residents can help support the cause at their next event.

With the help of an article in February 2013’s edition of the Guardian Magazine ‘G2’, what began as a joke between four friends back in September 2012 has since developed into a movement promoting equality and neighbourly love. The initial aim was to try to knock the far-right fascist group ‘English Defence League’ off the Google top spot for ‘EDL’ searches. Although they are yet to succeed without the aid of internet hacks, the ‘English Disco Lovers’ have raised money for many worthwhile local charities whilst trying.

Now that three of the original four founding members have taken a back seat, Head Honcho Alex (who understandably prefers not to divulge his last name in case he becomes a target) encourages collaborators from across the country.  There are local branches of the movement UK wide with particularly active members in Brighton, Bristol, the North East and Wales.  When asked what became of the other founding members Alex explained “I’m the one who saw the most potential in it.  The one who wrote the manifesto, the disco statement, did the logo, and really pushed it.  As I thought it was more than a one line joke and it had some real resonance. They were less behind it, it was more a fun thing for them and they didn’t really have the time to take it further themselves.” 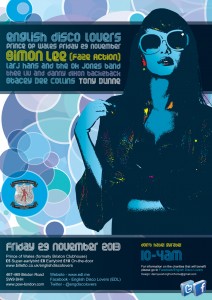 Famed for their catchy slogans such as ‘Don’t Hate, Gyrate!’ and ‘Fewer Xenophobes, more disco strobes’, the group has chosen disco as their medium as opposed to Dubstep or Dancehall for the following reasons:

“Disco is a genre with its routes very much in challenging inequality. The first discos were havens for the minorities; black people, gays, and Hispanic people, anyone who couldn’t go to normal clubs and be themselves openly, they went to Discos. Because of its association with these communities, Disco started to become a scapegoat for racism and homophobia and was driven underground…. So Disco has its own history of being crushed by inequality, so it seems very appropriate to take the music that was intrinsically about love and acceptance and use that to crush inequality and support acceptance and the coming together of people regardless of their skin colour, their sexual orientation or religion.”

At the English Disco Lovers Dalston Superstore event earlier this year, £1600 was raised to support local education charity ‘Hackney Pirates’ and local LGBT charity ‘All Out’.  For the upcoming event at Brixton’s Prince of Wales on 29th November, monies will again be split between two charities. The first is ‘17-24-30 No to Hate Crime Campaign’ which was set up to commemorate the victims of the April 1999 nail bombings which targeted the Black, Asian and Gay communities of Brixton, Brick Lane and Soho. 17-24-30 encourages people across these communities to work with each other to develop local projects to tackle hate crime. Whilst at the same time building stronger links with local organisations, businesses and authorities to help them engage more local people and further the No to Hate Crime Campaign. The second of the charities being supported is PPC (Positive Parenting and Children) who work with Children and families affected by HIV and Aids in South London, tying in with World Aids Day which takes place just two days after the Brixton event.

“Where the English Defence League cause divides and tension within communities, another way of subverting the acronym is to give back to those communities, bringing together the great and the strength in them.”

Join the English Disco Lovers at the Prince of Wales in Brixton on Friday 29th November for DJ sets from Faze Action’s Simon Lee, Larj Hans and OK Jones amongst others.  Expect to hear classics by Donna Summer and Chic as well as some lesser known gems. For a taster of what’s to come, listen to Faze Action’s September Mix Here: https://soundcloud.com/fazeaction/faze-action-september-2013-mix

To win a pair of tickets, email your name to competitions@brixtonblog.com