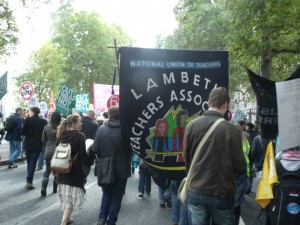 Teachers from Brixton are to take strike action next Thursday over government plans to change their pay, pensions and working conditions.

Members of The National Union of Teachers (NUT) and the NASUWT will stage a protest in front of the Lambeth Town Hall on October 17 at the same time as their colleagues around the country.

The strike is part of a series of protests across the North East, Cumbria, London, South East and South West, which comes after the Education Secretary, Michael Gove, refused to negotiate with the unions.

Sara Tomlinson, joint branch secretary of Lambeth NUT: “Teachers are seeing this very much as a referendum on Michael Gove and his damaging education reforms. We are seeing an unprecedented level of anger among our members who feel it’s time to stand up for a better, fairer and more equitable education system.”

Most schools in Lambeth are expected to be affected as these unions account for over 90 per cent of teachers.

A Department for Education spokesman said: “It is disappointing that the NUT and NASUWT are striking over the government’s measures to allow heads to pay good teachers more.

“Industrial action will disrupt pupils’ education, hugely inconvenience parents and damage the profession’s reputation in the eyes of the public at a time when our reforms are driving up standards across the country.”

Cllr Rachel Heywood, Cabinet Member for Children and Families, said: “We do not yet know what the level of closures will be on the day, but we will work hard to minimise disruption for parents and pupils.”

The Town Hall protest will begin at 9.30am.

A unions source told Brixton Blog: “The unions don’t have a final tally of schools that will be closed as a result of industrial action. However the level of anger at the damaging reforms being imposed by Michael Gove is extemely high and we expect most schools in the borough to be affected.

“It is a measure of just how strong feelings are that schools that may have remained open in the past, such as Corpus Christi Primary, will be closed.”

Medya Gungor - 13 October, 2020 0
Medya Gungor on reaction to the latest announcement about funding for music venues and a UK-wide campaign to support musicians

Contributor - 12 October, 2020 0
The Loughborough Farm has launched a Crowdfunder to raise money to support local people to keep healthy...

7 October, 2019
Go to mobile version
We use cookies to ensure that we give you the best experience on our website. If you continue to use this site we will assume that you are happy with it.OKPrivacy policy