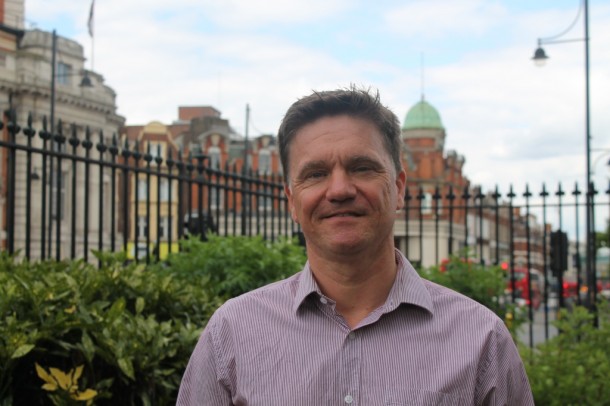 Starting at the beginning, I ask Edmund why the Edwardian period in Lambeth particularly captured his interest and how he came to author Lambeth’s Edwardian Splendours. “It was an era of huge population increase. More people were moving here and more people were living here”. He points to a graph with an impressive spike during the first twenty years of the twentieth century.

A visual thinker,  no sooner does Edmund order a coffee than our table is awash with photographs, charts and annotated drafts. This is good for me as when we meet my grasp on what does and doesn’t look like Edwardian architecture is shaky as is my visualisation of population swells.

“It was a period when in London and all over the country the way people lived and worked, the distances they traveled, were changing. Whereas in the past people had worked within a mile of where they lived, commuting to work as we understand it now became common ” These huge social changes had a big impact on Lambeth as an area. “For the first time people were living in Clapham and Brixton and working in the West End or the City.” Edmund is also fascinated by the great changes to domestic life during this period, as he explains, families became smaller, households became servant-less and women ventured out into the world of work.

“The Edwardian period was a time of relative prosperity too, which meant a lot of building and expansion – whole streets were built for the growing population, and most survive today looking pretty much the same.”

Some such streets in Brixton being Claverdale Road (left), Baytree Road and Dumbarton Road all in SW2. That the Edwardians in Lambeth were concerned with health, housing, education, transport and leisure is also evidenced by the number of buildings to that purpose which were built and stand now, most notably Lambeth Town Hall and the Ritzy.

Much like the changing conventions of personal transportation, for the first time building materials could easily be transported around the country, meaning freedom of design for architects no longer bound to using the local stone. Edwardian’s used materials, particularly bricks, from all over: “Edwardian’s loved bricks. They loved different coloured – often bright orange bricks – and intricate patterning.”

“They also loved light. Large windows, and large rooms – high ceilings as well as large floor space- were very desirable in Edwardian residential and civic buildings.” Edmund flicks through pages of photographs and notes which include Brixton Road’s Bon Marche building  and Morley’s, Market House on Coldharbour Lane, The Ritzy, residential flats on Rushworth Road, Walton Lodge Laundry (next to Granville Arcade) and the Carnegie Library in Herne Hill.

But why does Edmund think that Edwardian architecture, more than buildings erected later in the twentieth century, have stood the test of time? “It was a time when the standards of building were greatly improved, building standards and inspectors came into being” The period really was “built to last.”

“The Edwardians used traditional building techniques and materials which had been tried and tested, and so unlike the buildings of the 50s and 60s where architects and engineers were experimenting with new designs and materials, the results were sound and popular.”

“There’s definitely an extent to which it has become a golden era or belle epoch in the national psyche which has an impact on how we see the buildings.Historical dramas like Upstairs Downstairs or Downton Abbey glorify the Edwardians and we associate the time with prosperity – although this forgets the other half of society who weren’t able to enjoy the luxuries of Edwardian life, recreational opportunities like going to the cinema or the opera opened up for a growing middle classes.”

But why doesn’t Victorian architecture have the same appeal to Edmund or to Lambeth? Whereas the Victorians stayed inside, shrouded in heavy drapes and ornaments, ‘fresh air culture’ became fashionable during the Edwardian period.” Their dedication to light, space and ‘built to last homes’ is why so many Edwardian residential and civic buildings survive to date.

If properly modernised or extended, Edmund also thinks that Edwardian buildings can be re-purposed for modern times. “The Ritzy cinema was  very sympathetically modernised from a single screen cinema to a multi screen one but has retained all of the original Edwardian features. Edwardian schools throughout Lambeth have been converted into flats, such as Alpha House, during the 80’s and 90’s when there was a dip in population growth”… unfortunate that now the borough is crying out for school places.

Knowing more about the buildings around you and your local history gives you a greater stake in the environment. Architecture acts as an aid to feeling part of a community.

Finally I ask Edmund what he thinks about the brand new Lambeth Heritage Festival and what he hopes it will achieve. “It’s very welcome indeed,” he smiles. “Knowing more about the buildings around you and your local history gives you a greater stake in the environment. Architecture acts as an aid to feeling part of a community. If you think of yourself as a Londoner, a Lambethan or a Brixtonian, you identify yourself with the place and take an interest in its development. I think the heritage festival will encourage people to be more interested in their environment and its history and that can only be a good thing.”

Do you have memories of the Loughborough Road area?

Fashion week comes to Brixton with a ‘Windrush’ theme