‘There was a swimmer who got hypothermia and I had to lend him one of the blankets I’m selling, it’s quite cold in there!’ giggles Sarah Lovett, stallholder at Brockwell Lido’s sixth annual design event, The Modern Movement.

Set alongside the shimmering blue waters of the Lido, equipped with a handful of devoted swimmers enjoying an alfresco dip, The Modern Movement houses a series of stalls pitched up around the pool, ostensibly offering a nifty selection of chic, Art Deco furniture, but with plenty of vintage fashion and retro knick-knacks for those with less cash to splash. 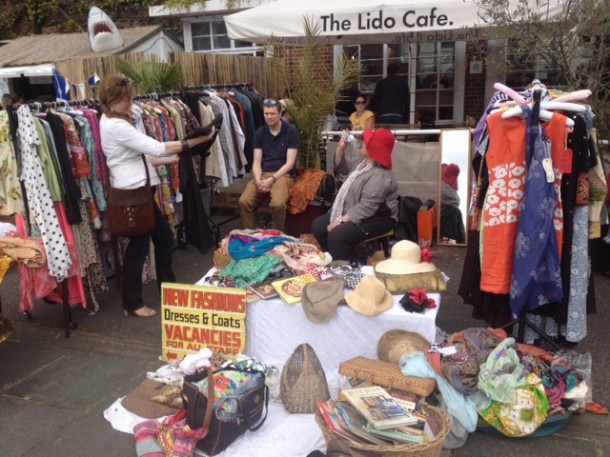 Perfectly placed against the backdrop of the beautifully preserved, Grade Two listed 1930’s Lido building, The Modern Movement aims to fuse both the architecture and furniture of the Art Deco period. ‘It’s great to be in this 1930s setting’, agrees stallholder and Brixton resident Sarah Lovett. Sarah’s stand is a popular spot, with countless style conscious punters pawing over her collection of vintage homewares, clothing and jewellery. ‘When I’m not doing this I work in set decoration, that’s why I love props so much. Most of the stallholders are creative types, however it’s all down to Moses, the organiser; we are his comrades!’

Moses Otunla is indeed the creative force behind the event, with plenty of design acumen himself thanks to his work running his own fine furniture shop Bleu, on Railton Road. Since setting up The Modern Movement in 2008, Moses has used his circle of industry contacts to pull together a top notch group of vintage furniture suppliers, including the companies Retro Barn, Dad Design and ID for London.

‘I started the Movement with a lady who used to be the art coordinator for the Lido’, Moses tells me. ‘We came up with the idea to connect furniture and architecture, and began by collaborating with students from Camberwell College of Art’. The Modern Movement still retains its South London roots, with many of the current stallholders hailing from South London stock, namely Brixton, Crystal Palace and Kennington and, despite some initial concerns, the event still has a distinctly home-grown feel to it. ‘It was a hard idea to pitch, as you can imagine’, Moses laughs. ‘When you’re trying to convince someone to spend their weekend at a lido with their furniture, the first question they always ask is, what happens if it rains?!’

Despite such a weather dependent setting, the backdrop of the Brockwell Lido is central to the integrity of the event. ‘I would consider doing a similar event elsewhere’, Moses tells me, ‘but the actual Modern Movement has to be here because it’s about a particular period of furniture and a particular style of architecture’. The Lido itself is a site deserving of celebration, since it very nearly fell victim to the public spending cuts made by Thatcher during the mid eighties. ‘At the height of Thatcherism, the government wanted to flatten the building’, Moses tells me. ‘The Lido was closed, and was only saved by protesters who jumped the walls and squatted here to prevent it being bulldozed’.

With the sunshine beating down upon swathes of happy customers sipping drinks and reclining by the water’s edge, it’s astonishing to think that this much loved local landmark was so nearly turned to rubble. Now a location firmly back on the radar of architects, 20th century art aficionados and antiques collectors alike, The Modern Movement is the perfect example of right place, right time. 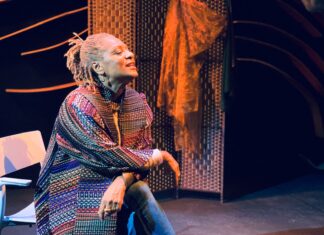 0
Phaedra was a princess in Greek mythology, half sister to the minotaur - half bull, half man - and kidnapped by her husband-to-be. If...