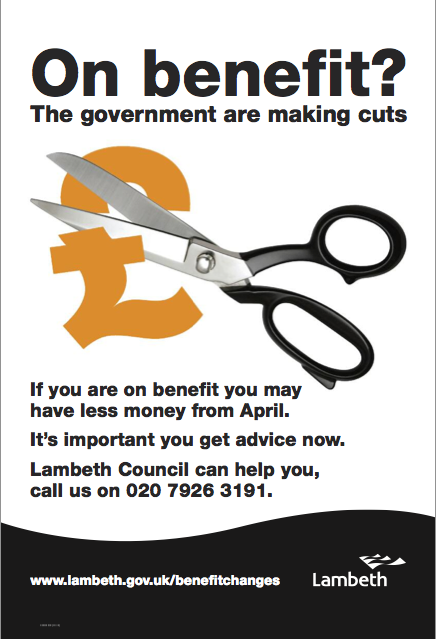 The leader of Lambeth council, cllr Lib Peck, has launched a campaign to warn residents about the impact of government benefit cuts.

The council unveiled 46 posters, right, today to make residents fully aware of how the cuts, due to hit in April, will affect them. Lambeth has the second highest number of housing benefit claimants in London.

The borough will also host a its first ever Family Finance Fair on March 9.

Cllr Lib Peck said: “The scale of the government’s benefit cuts is huge, affecting up to 1 in 6 of our residents. It’s clear that thousands of residents, many of whom are in work, will see their weekly incomes cut in two months time. Cuts to benefits will force hundreds of families to move away from areas where they have support networks and children in school.

“Across London hundreds of thousands of families face losing money they can’t afford to go without because of these benefit cuts. In Lambeth, over 30,000 people, many of whom are working, face paying more following the government’s cuts to council tax benefit.

She added: “We are determined to do everything within our power to alert Lambeth residents to the government’s benefit cuts and provide support and advice to local people on managing their finances and opportunities to find jobs and training.”