Brixton’s Back Cultural Archives last night (3 July) hosted a display of unity in the face of recent events with speakers from several faiths and none.

Representatives of the local police and Lambeth council and  local MP Helen Hayes were joined by Buddhists, Methodists, Hindus, Jews, Muslims, Rastfarians and others.

Faiths Together in Lambeth (FTIL), a charity that works to bring people together, announced the creation of  a Tree of Hope at Lambeth Country Show in Brockwell Park on 15 and 16 July.

The community is invited to send messages to the charity’s website that will be displayed on the tree at the show.

Send your message to www.faithstogetherinlambeth.org

The evening was hosted by Irfan Mohammed with support from the BCA and the Brixton Business Improvement District.

Detective chief inspector Oxley of the Met paid tribute to the officers who had attended the terrorist attacks at Westminster, Southwark and Finsbury Park as well as the fire at Grenfell Tower.

“We really value everything we do for the public. The police are you with special powers. We use these powers to keep you safe.”

Council leader Lib Peck paid tribute to the huge amount of effort and sacrifice by the police in the last month.

Rev David Musgrave, a Methodist, said the period since the murder of MP Jo Cox a year ago had been one of uncertainty and confusion. But, he added: “There can be no room for barriers between us.”

Lev Taylor of the South London Liberal Synagogue offered “solidarity and support from the whole Jewish community”. He told how he went with his friend, a Muslim, to the Finsbury Park Mosque the day after the attack there. His message: “Don’t let the small things bring us down. We have more in common than divides us.

“How good it is when people come together in unity.”

Mohammed Ijaz from the South London Islamic centre also urged unity as did Ras D Levi of the Ethiopian World Federation. Referring to the victims and survivors of the Grenfell Tower disaster, he said families who suffered the trauma of the event needed internal peace. “We are all brothers and sisters, coming from the same creator”.

Lambeth deputy mayor Guilherme Rosa, brought up as a Portuguese Catholic, said there was space for every religion: “Londoners can only unite”.

Flora Nicholson and Viv Isaac told the gathering about the Tree of Life project that will take place at the Lambeth Country Show.

The evening rounded off with a moving rendition of Bridge Over Troubled Water by Adrianna. 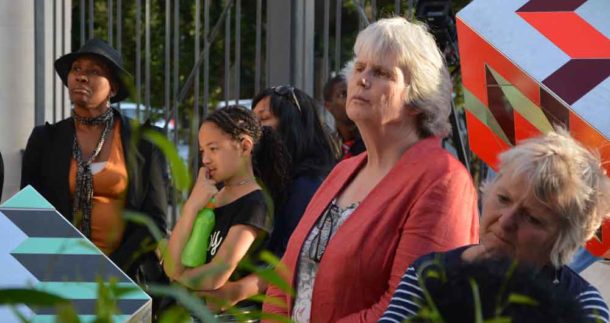 Free training to grow your own business