Tributes have been paid to Lambeth Mayor Cllr Mark Bennett, who died this morning aged just 43.

In the hours following the news of Mark’s unexpected death, of a suspected heart attack, the Blog has received a number of touching memories and tributes from politicians, colleagues and readers. We’ve put together a selection of your memories here, and if you’d like to add you own thoughts, please email us.

I am so sad and shocked to learn of the death of Cllr Mark Bennett, a dear friend and colleague for over ten years.  His loss will dismay many across Lambeth and beyond.  You couldn’t meet Mark without being impressed by his warmth, kindness, intelligence and good humour.  He loved his community, and Streatham in particular.  He was a unique figure – he took part in the London-to-Brighton bike ride to raise funds for the British Heart Foundation dressed in a linen suit and straw boater, and he rode around the Lambeth Country Show on a camel while wearing a striped blazer.  Mark was Labour to the core of his being, and he firmly believed that politics had the power to change the world for the better.  He devoted his life to helping others –  the victims of discrimination, disadvantaged children, and through his work as Mayor of Lambeth he supported food banks to help those facing hunger and poverty.  Mark was one of life’s good guys and he’s been taken from us far too soon at just 43 years of age.  There’s a great big hole in our lives where Mark used to be, but we’ll treasure his memory forever and be grateful that we were lucky enough to know him.

I am devastated to have lost someone who was not only a fantastic representative for the borough, but also a much loved and close personal friend.

Mark was a very talented individual who went above and beyond for the people of his ward, and for the whole community.

He loved being mayor, welcoming people to the borough and supporting great causes, such as his support for The Trussell Trust, which runs food banks across Lambeth. He was well known for his passion for history often peppering his speeches with stories from the past.

We will all miss him deeply.

Just heard @MayorOfLambeth died this morning very sad will always remember when he came to my event. R.I.P @MayorOfLambeth thanks for supporting my music in aid of @alzheimerssoc 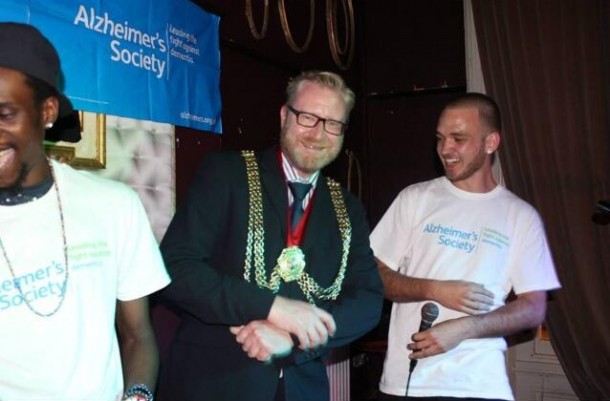