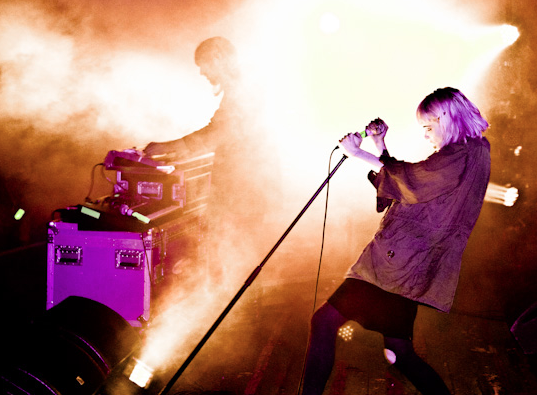 Crystal Castles continued their world tour with a stop-off at the Brixton Academy on Saturday night, banging out one of their riotous shows to an eager crowd.

With a touch of melodrama, fans were kept waiting, with the live music only kicking off at 9.45pm – a long wait for a core of keen electro-heads who seemed to have already peaked by 9pm. Psychedelic space-rock support act Bo Ningen were cancelled – their Twitter simply announced “we’re really sorry it’s out of our hands” – and anticipation was at a fever pitch in the front rows by the time Crystal Castles finally rolled onstage.

The Canadian duo got straight into the groove, pounding out ‘Plague’ from this year’s album ‘III’. Front-woman Alice Glass did her usual trick of getting off the stage to crowd-surf, dreamily wailing into the mic while adoring fans strained to get close to her.

This initial exuberance was slightly tempered by an onslaught of venue staff rushing to the barrier to look after some younger members of the audience, evidently taken aback by the energy around them. After obvious pleas from a harassed-looking stage manager, a petulant Alice attempted to calm the crowd but instead drove them into greater agitation:

“We’ve been asked to say that you guys need to be a bit more tame – but it’s not like we want to tell you what to do.” Warming up, she continued: “It’s so unfair. There is no heaven, there is no God, there is fucking nothing!”

Even playing to 5,000 at the Academy, Crystal Castles kept the intimate feel of their earlier gigs, ranging from breathless renditions of first album favourites ‘Black Panther’ and ‘Untrust Us’ to a sweaty encore with Alice once again floating above the crowd to ‘Sad Eyes’ from their latest album. An epileptic light display drove home the grimy techno club feel.

Three albums down the line, Alice hasn’t lost any of her onstage energy, still managing to whip crowd into a delirious frenzy while producer Ethan masterminds the sounds behind his trademark hoodie. This is live electro at its best – go and see this band. 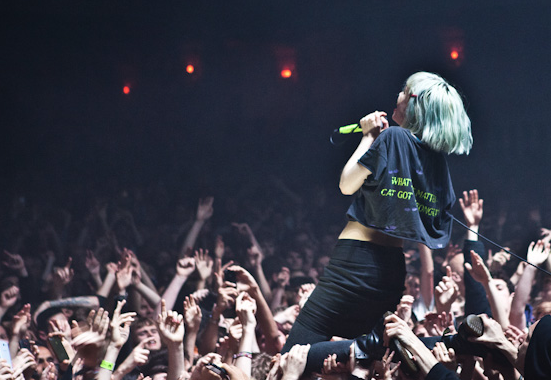