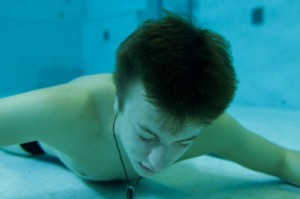 Actor-turned-director Karl Markovics’ debut feature Breathing (Atmen) is a sensitive, beautifully composed drama which focuses on the rehabilitation and growth into manhood of a 19-year-old offender named Roman Kogler (Thomas Schubert), who’s been banged up in an Austrian detention centre for an earlier, initially unspecified crime.

The blond, boyish Kogler begins the film spiky and remote, possessed of a petulant disregard for his sensitive case worker, and crushed under the weight of the dehumanizing rituals of his incarceration. Kogler soon abandons his dreary welding job in a fit of pique, and his prospects look bleak. However, for reasons that are at first unclear, he applies for a new job as a mortuary attendant, responsible for dressing, packaging and delivering corpses to their new resting place. His new employment is of a decidedly macabre nature but, after a period of adjustment, he takes to the work and begins a long journey toward redemption.

The central narrative hook of having Kolger quite literally stare death in the face every day, while not especially subtle, is an intelligent way to frame the character’s need to assuage his own guilt and come to terms with the spectre of mortality. Furthermore, it allows for some gruelling yet sensitively handled sequences which cast fresh light upon a job which is usually kept far from the public eye. Death constantly haunts the frame, and significantly amplifies the melancholy tone of the film.

The film’s content is complemented excellently by its restrained and unfussy visual style, which certainly owes a debt of gratitude to the likes of fellow Austrian director Michael Haneke. A combination of expansive wide shots, long takes, measured editing and a steely, grey-blue palette help to evince the inner mindset of Kogler. Meanwhile, a number of individual shots are simply astonishing and showcase Markovics’ imaginitive flair behind the camera.

While Breathing’s compositional style is certainly remarkable, it would be less effective without a convincing central performance to anchor the material. Luckily, Thomas Schubert, present in almost every scene, is superb as the young inmate. He has a likeable, resolute air in spite of his early inertia, and seems to grow in stature as the film itself grows from small and intimate character study to a wider treatise on life, death and responsibility, like a cross between the films of Carl Dreyer and Wim Wenders’ Paris, Texas. Roman’s development is incremental and utterly believable; slowly but surely, specks of emotion begin to appear on his face and his body language becomes more open as he learns to trust others.

Clearly, there is a political edge to Breathing but Markovics less interested in explicitly investigating the nuts and bolts of Austria’s youth justice system than notions of individual redemption and responsibility, and how young offenders can successfully rehabilitate. With this exceptional debut feature, Markovics has pulled off a real achievement; he’s crafted a gentle, non-didactic film about a tough subject that’s ultimately uplifting rather than depressing. Highly recommended.

Breathing is out today at the Ritzy Cinema, Brixton Oval. To book tickets click here.

Ashley Clark runs the film blog Permanent Plastic Helmet. You can follow it on Twitter @PPlasticHelmetand/or him @_ash_clark.