Walking through Brixton Market is a riot of fresh fruit and vegetables of all colours. Some are familiar, but sometimes your eye is caught by something you don’t recognise, which is exactly what happened when I saw green oranges on many of the stalls. Some questioning and Googling later, I realised these are Jamaican oranges. It isn’t just the colour that is different. They are thinner skinned than the peeling sort, such as Jaffas, which we are used to in the UK. They have plenty of pith and pips and a bittersweet flavour. I knew immediately that they would make the most fabulous marmalade…

Sickly sweet instead of tangy and tasty, commercial marmalades have always left a bad taste in my mouth. Determined to overcome this dislike, I decided to try making my own and see if I could be convinced. Not only was I wholly won over, I’ve become slightly obsessed, making pots and pots of the stuff from every citrus I can get my hands on, entering the World Marmalade Awards and slathering it on doorsteps of Wild Caper sourdough like there’s no tomorrow. The homemade stuff tastes amazing and is incredibly cheap and easy to make. You’ll never look back.

The marmalade is very easy, but it does take several stages and needs to left overnight. Don’t be daunted though!

Start by cutting the oranges in half and juicing them. You should get about half a pint from this amount of oranges. Reserve the juice in a jug. Keep any pips you came across and soak them in water. Then chop your orange shells. Pull the most fibrous flesh out and then cut the peels in chunks of your choosing. I like my marmalade quite thick cut for flavour and ease of prep, but it’s your choice.

Soak the peels overnight in about 2 pints of water until it turns orange and smells delightfully citrus scented. Bring it all to the boil and then simmer for up to hours or until the peel is soft and squishy, but not pulpy. Add in a bit more water if needs be.

Iron your muslin cloth to sterilise it (and cut it to be smaller if needs be) and gather the reserved pips in it like a purse, tying to the handle of the pot so it hangs down into the boiled peel mix. They contain extra pectin that helps set the marmalade. Turn the oven onto 160℃ and put the jars in, using a baking tray rather than trying to grab individual hot jars with oven gloves and feeling like you’re playing a game fit for particularly sadistic PTA fundraisers. Get your thermometer to the ready if you have one or put your saucers in the freezer if you don’t.

Add the reserved orange juice to the mix, pour in the sugar and the lemon juice and bring the pot back to the boil. This is the stage when you work your magic and turn the mix into marmalade by heating it to 104℃ exactly. The thermometer will tell you this with ease, but you can also tell by spooning a drop or two of the boiling liquid onto a cold saucer, leaving for a sec and testing it with your finger to see if it ‘wrinkles’ when pushed. If it does, you’ve reached 104℃ and if it doesn’t, keep trying it out on the alternate chilled saucers til it does.

Take the pot off the heat immediately. Add the rum (or ginger if you prefer a teetotal kick) and stir well. Leave the marmalade to sit for a minute or two to stop the peel sinking in the jars and then carefully fill the jars you’ve just taken from the oven right to the brim. Both the jars and the marmalade are obviously devilishly hot so keep your wits about you and any small children and pets away. Cover with the wax circles from your little kit. 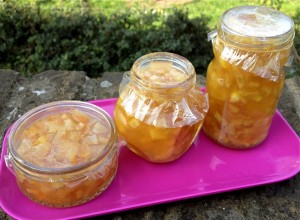 Allow the jars to cool just enough to handle, then wet the cellophane lids well with a clean washing up sponge and stretch tightly over the top of the jar and fix with the rubber bands. This is fiddlier than you’d think and there may be some sailor’s language to accompany the rum. Let the marmalade cool completely and set before digging in and sampling your handiwork.

You’ll be amazed. It’ll be punchy with citrus and a slight hint of smooth rum with each peel exploding into little chewy nuggets of deliciousness. You won’t be able to stop yourself having a second (or third) slice of marmalade smeared bread, but if you can bear to part with a jar of it, your boss will understand why you are late for work now breakfast has become the highlight of the day again! 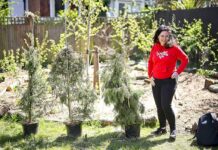