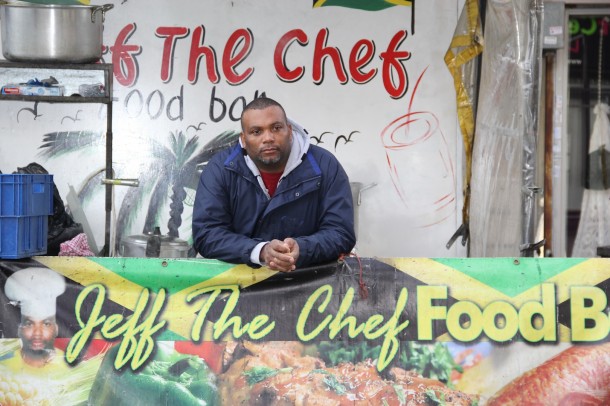 A chef fears he will have to close his popular jerk chicken food stall after council officers banned the use of barbecues in Brixton Market.

Jeffery Cooper, who owns  “Jeff the Chef” stall in Station Road, has started a petition to get his famous grill relit after outdoor grilling was banned by the Lambeth council.

Cooper says he has lost at least 60 per cent of his business since outdoor grills in the market were outlawed in June following complaints from some other traders.

Now he cooks his chicken at home and then reheats it at his stall but he says it is not the same. He said: “I am really thinking of closing the business because I’m not making any money. The smell of the chicken on the barbecue attracts people. The barbecue draws people in. If they don’t see it, they don’t come.

“Brixton market would lose something valuable if I had to close down. Jeff the chef brings business to Brixton. People come from all over the country, even from France, Holland for my stall.”

Relocating is not an option for Mr Cooper. He said: “Brixton is my home, I don’t know where I would go. I have been here for eight years, it’s hard to go and start somewhere else.”

John Gordon, operations manager of the Brixton Market Traders Federation, said: “The issue is smoke. We have traders who do not want to work anywhere near a barbecue with jerk chicken because it makes their clothes smell, it makes everything smell.

“There is a solution, there is always a solution, so what it needs is for Lambeth council to sit down and work out a solution. And once that is solved, everyone will live happily ever after.”

Mr Cooper hopes to get a couple thousand signatures on his petition before he hands it into the council.

Cllr Jack Hopkins, Cabinet Member for Safer and Stronger Neighbourhoods, said: “I love jerk chicken and we are certainly not banning it. These BBQ drums are great when used properly and in plenty of space, but don’t work well in the street. We’re more than happy to help advise these traders on getting gas versions which produce far less smoke.”

Two for one: Sumac