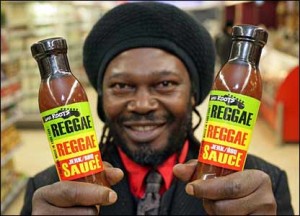 Brixton Hill is the star of a new advert featuring one of Brixton’s best-known entrepreneurs, Levi Roots.

The road is the setting for a BBQ in an animated advertisement featuring Roots singing his famous Reggae Reggae Sauce song while barbecuing in the garden.

The minute long advert is made by Aardman productions, the team behind Wallace and Gromit, and will be seen on television screens later this month.

Brixton Hill is clearly visible on the wall of the garden before the camera zooms in on Roots, real name Keith Graham, cooking some chicken and sausages as they join in by dancing on the grill.

Levi Roots became known to a wider audience when he appeared on Dragons Den and secured the backing of two of their investors, catapulting his sauce and “Reggae Reggae” range of ready meals into supermarkets.

Roots said of his animated double: “He’s definitely cooler, more handsome than me. I’ve always been a big fan of Wallace and Gromit so it’s a real treat to be made into one of their characters; if not a little surreal.

“Seeing my character on screen is like watching myself on Dragons’ Den all over again and I keep wondering ‘is that really me?’ but I love it. They’ve done a great job.”

Police respond to reports of gunshots in Ostade Road, Brixton