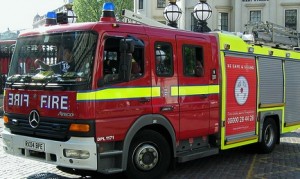 people were evacuated from their homes this morning after a fire broke out in Crownstone Court, Brixton.

A man, woman and their teenage daughter escaped from their ground floor flat and were treated at the scene by the London Ambulance Service for smoke inhalation. The flat was badly damaged by blaze, which started at about 1.40am.

A woman and baby also escaped from their first floor flat, which was also partly damaged by fire.

Watch manager Simon Friedlander from Brixton Fire Station said: “It was a serious fire so it’s really fortunate that no one was badly hurt. We were very relieved that everyone managed to escape safely.

“We were on the scene within five minutes of being called to the fire and crews worked really hard to bring the fire under control as quickly as possible. The ground floor flat was very badly damaged by the fire.”

It is thought that a moped outside the flats was also damaged by fire. The Met Police were on the scene and the cause of the fire is under investigation. Two fire engines, one from Brixton and one from West Norwood, and around 10 firefighters battled the flames.