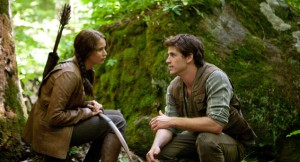 The big new release this week is Gary Ross’ adaptation of The Hunger Games, in which Jennifer Lawrence and Josh Hutcherson fight for their lives in what looks to be a teen-friendly cross between 80s Schwarzenegger murder-fest The Running Man and Kinji Fukasuku’s insane schoolkid-on-island rampage Battle Royale. The critical response has been largely positive (it holds a 90% ‘Fresh’ rating on aggregator site Rotten Tomatoes), though Little White Lies’ Matt Bochenski has nailed his colours to the mast, proclaiming that “Any critic who goes 5-stars on The Hunger Games is guilty of professional negligence”. Why not find out for yourself? I haven’t seen it, in case you hadn’t guessed.

Also new this week is The Dardennes Brothers’ moving drama The Kid With A Bike. It’s centred around an extraordinarily natural performance from Thomas Doret as Cyril, a sprightly, temperamental 11-year old who sets out to find his bicycle and then his father, who jettisoned him at a children’s home and did not return. Having struck gold in the past with the likes of Rosetta and L’Enfant, the brothers bring their trademark blend of naturalism and hard-won, low-key emotion to this tale. There are few pyrotechnics, rather a series of tough truths played out with little fanfare and great skill by the perfectly chosen cast.

Pick of the week is Friday’s late night showing of Stanley Kubrick’s masterful horror The Shining. It’s a film that demands to be experienced on the big screen, in the company of other people. Not only is the terror inherent in Roy Walker’s production design amplified to near-unbearable levels, Jack Nicholson’s performance as tormented writer Jack Torrance transforms into something more comically heightened than you may expect. In case you can’t make it, here’s The Shining re-cut as a heartwarming family comedy instead.

Also coming to the Ritzy this week is the Human Rights Watch Film Festival (Fri 23-Tue 27), organised by the Human Rights Watch Group, which boasts a selection of films that hope to make a difference. Highlights include Werner Herzog’s death row doc Into The Abyss (which screens again this week with satellite Q&A with the director) and Brother Number One, a political biography of Pol Pot.

Remember, you can still catch recent highlights Once Upon A Time In Anatolia and 21 Jump Street, both of which continue with regular screenings this week.

Take Two: On the Sly @ Ritzy cinema and Brixton Topcats...