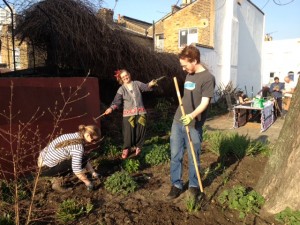 The Edible Bus Stop on Landor Rd, which had its first birthday in mid-March, is hoping to become an Edible Bus Route.

The team behind the urban garden at the 322 bus stop on Landor Rd want to create similar projects at other stops along the 322 route, from Clapham Common through Brixton to Crystal Palace.

Work on the second EBS site is to begin on West Norwood High Street on April 1 in collaboration with Spacemakers Agency. There are also plans to create urban gardens behind the tube station at Clapham Common and on the green space between Stockwell Skate Park and Brixton Cycles on Stockwell Rd.

Will Sandy from the Edible Bus Stop said: “As a landscape architect, my passion is how communities interact through space and design. I always use the analogy of the garden fence – it used to be a point of contact, to watch over your neighbours and share stories. Now it is a means of security, keeping the world out. By creating public community spaces I hope we can reverse this attitude –  the last year at the EBS on Landor Road shows that this is possible.”

In order to open up conversation about the potential of empty spaces in the city, EBS have also given Kingston University students a design competition brief to come up with designs for other stops along the route. These will be exhibited at the Chelsea Fringe Festival in May/June.

Anyone can champion a garden along the route – if you want to do so, you first need to find an empty space near a bus stop and then EBS will be on hand to help you set it up according to design standards (no used tires or wooden palettes). Planters can be used in lieu of dirt or green patches. It’s worth getting lots of local people involved of course, so EBS can help with a consultation process prior to creating the site too.