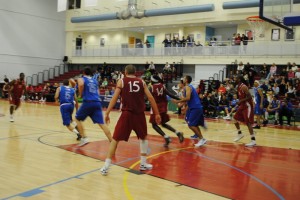 LSBU Brixton Topcats slipped to a fourth consecutive league defeat with a 93-68 loss against leaders Bristol Flyers on Saturday, which sees them now ninth in the league.

Still struggling with injuries and only fielding a team of eight, the Topcats looked like they were going to make a game of it in the first quarter. Early baskets from Sam Toluwase (32 points personal on the night), and Tom Adorian (14pts and 10 rebounds) got the Topcats going. Some slick post play from Uche Umweke gave Bristol problems as the teams ended the first quarter tied at 17 points apiece.

This close contest became very one sided in the second and third quarters as Bristol stepped up a gear, and Brixton were unable to match them. Bristol moved the ball well around the perimeter and generated open shots – which they duly knocked down. Tyrone Treasue was typically effective, shooting over 75% from the field on his way to 17 points personal for Bristol. The momentum slowly moved totally into Bristol’s favour, and Topcats frustration was clear to see as they consistently failed to understand the way the game was being refereed, which saw several technical fouls awarded against them. Toluwase continued to force his way to the basket despite some heavy handed Bristol defence, as he added to his personal points tally. While Brixton’s offence lacked consistency, it was at the defensive end that they really let themselves down, failing to show the heart needed to counter Bristol’s well-oiled offence.

After three quarters, the Flyers held an imposing 73-45 lead. With the contest effectively over, Brixton played some better basketball in the fourth period and did reduce the arrears to 18 points at one stage. Toluwase remained the main offensive threat, with Umweke and Adorian chipping in with more points. However, their efforts were too little too late as Bristol walked away with a comfortable 25 point victory.

Head coach Andy Powlesland said: ”we are really missing key players and it shows down the stretch as we cannot keep the level of intensity required to compete for 40 minutes. With the business end of the season for both the national league and the University fast approaching we are hoping for the speedy recovery of both Aturo Noha and Karolis Petkus.”

Topcats are at home to eighth–placed Medway Park Crusaders on Sunday 26th February in a must win game at Brixton Recreation Centre at 4pm.