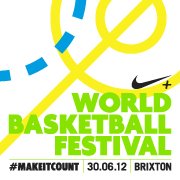 Windrush Square is to be taken over by hoops, baskets and bleachers this summer as the Nike World Basketball Festival comes to Brixton.

The free basketball festival will be held at Windrush Square on June 30, followed by a ticketed event at the O2 Academy (aka Brixton Academy) in the evening.

A full-sized basketball court, complete with bleachers, is to be installed in the square. There will be athlete clinics in the morning for young basketball players and then from 1pm onwards, 3-on-3 competitions for the public. An all-star GB team will also play a five-aside match against ‘Team Nike’ and DJs from Choice FM, Wah Wah nails and Nandos will be on hand to keep the crowds happy.

The evening event at the Academy will feature hip-hop bands, UK dance crews and the final of the UK slam dunk contest. All proceeds from ticket sales will go to the Luol Deng foundation, named after Brixton’s biggest sports star and face of the Brixton Pound £10 note.

The choice to stage the event in Brixton confirms its place in the hearts of many as the home of UK basketball. The Brixton Topcats is the longest-running London basketball team with many of its former players now playing for Team GB for the Olympics.

Luol Deng is currently suffering from a torn ligament in his left wrist and there is heated debate in the US about whether he should play in the Olympics for Britain this year. Deng is under growing pressure from the Chicago Bulls to pull out of the games, for fear playing will harm his long-term career.