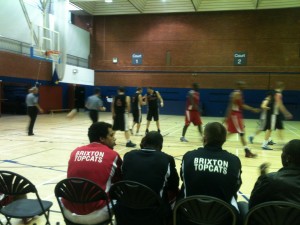 Reading Rockets progressed to the semi-finals of the National Trophy with a hard fought 70-69 win at the LSBU Brixton Topcats on Sunday. Reading were quicker out of the traps in the first quarter, moving to a 22-16 lead at the end of the period behind some characteristically precise shooting from the likes of Harrison Gamble.

Brixton struggled to find their offensive touch, although Arturo Noha found his way to the basket on more than one occasion on his way to 15pts personal on the night.

The first quarter threw up some early foul trouble for both teams with both Papa Demba Kasse (Brixton) and Luke Nelson (Reading) picking up a pair each and having to sit down. Brixton were definitely missing injured centre Tom Adorian, sitting this one out with a dead leg.

The second quarter followed a similar pattern, despite the departure of Reading guard Robbie Parker after he picked up a mouth injury. Brixton lost their own shooting guard Karolis Petkus to a knee injury and as Reading sat in a zone, Brixton continued to struggle offensively with none of their other scoring weapons able to get into gear. At half time, the visiting Rockets led 38-26.

Coach Powlesland’s half-time team talk seemed to wake the Topcats up as Toluwase, Knight and Demba-Kasse began to get their scoring games going. Brixton’s renewed defensive energy helped them fight back to within single digits to 50-56 by the end of the quarter. Samuel Toluwase (19pts) threw down a couple of thunderous dunks in the quarter to give the noisy home support hope of a Brixton comeback.

Brixton’s momentum carried into the final quarter as they were able to catch and overtake the Rockets, thanks to an improved defensive full court effort, which allowed them to hit the bigger, slower rockets on the fast break.

A technical foul on Reading coach Nuruzade was only partially punished as Brixton made one shot to move into the lead for the first time in the game with three minutes on the clock.

A defining moment was when Marcus Knight went to the line for two free throws with the Topcats up 69-68, and 25 seconds left on the clock and missed both. The Topcats then fouled Lukas Aleksandravicius, who made both free throws to put Rockets up one, with 12 seconds left.

But the game was not over as Kasse stole a Reading inbound pass, passed to Toluwase who drove to the basket for a good look at a layup basket. The ball rimmed out and Noha secured the offensive board, but he couldn’t get a shot off with Reading defense all over him. The time on the clock ran out.

Powlesland said: “that was a real good second half, but we didn’t seem to get the rub of the green on that one, and we need to make our foul shots down the stretch if we are going to win the close ones.” Powlesland complimented Reading’s play, saying they “stayed strong and executed.” He said: “We need to focus on the league now and finish as high as we can for the play-offs.”

The next home game at the Recreation Centre for the Topcats is at 4pm against the Leicester Warriors on 29 January 2012.