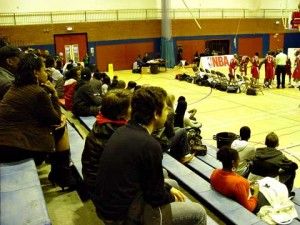 LSBU Brixton Topcats slipped to a fifth consecutive league defeat on Sunday at the hands of Medway Park Crusaders. A disjointed first quarter saw the Topcats fall behind 15-18. Some good back-to-basket play from Tom Adorian, and a trademark slam from Sam Toluwase were the highlights for a Brixton side still without Karolis Petkus and captain Arturo Noha.
The second quarter saw Medway Park extend their lead to 38-31. Adrian Fenyn started to find his scoring touch for the visitors, and was undeterred by a nasty head injury sustained seven minutes into the second quarter. Demba Kasse knocked down a couple of mid range jumpers for Brixton, as he started to heat up en route to a 16 point personal tally.

Brixton were able to reduce the arrears slightly in the third with Demba Kasse continuing to score, and Toluwase chipping in despite having a relatively quiet night (12pts personal). Uche Umweke added some important points off the bench, helping the Topcats back within four points (57-53) after three quarters.

The comeback looked on – but Brixton were unable to sustain the run in the fourth quarter as the well organised Medway Park offensive sets continued to create open shots for guards Baker and Raymen. At the other end, the offense dried up again for Brixton who finally went down 69-78.

Head Coach Andy Powlesland said: “we were disappointing today, we never really got going offensively and Medway just got too many easy baskets where our defense was missing.  Its an uphill struggle now if we want to be involved in the play-offs, we will have to find some form from somewhere.”

Topcats next game is on 4th March against Westminster Warriors at Brixton Recreation Centre with a 4pm start.

30 July, 2012
We use cookies to ensure that we give you the best experience on our website. If you continue to use this site we will assume that you are happy with it.OKPrivacy policy