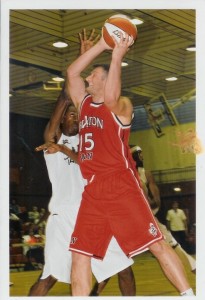 A short-handed LSBU Brixton Topcats side recorded a huge 88-56 road win at Tees Valley Mohawks on Saturday to stay in the hunt for a playoff spot. Plagued with injuries and sickness, the squad were only able to field five full- fit senior players and a player coach for the long trip up to Teeside.  With this in mind the Topcats did not expect an easy ride at Tees Valley – but it was the Topcats who set the early pace jumping out to an immediate lead. Samuel Toluwase led the way with the scoring (as he has done for much of the season) on his way to a huge 38pt display. Toluwase showed his versatility with drives, dunks and outside shooting to help Brixton to a 25-16 first quarter lead.

With a depleted team, it was always going to be important for the rest of the Brixton team to shoulder some of the scoring load – and that’s exactly what happened in the second quarter. Tom Adorian, Jon Gaymond, Uche Umweke, and Andrius Vaitiekus all got in on the act as Brixton moved to a commanding 48-28 lead at half time.

Into the second half, and Brixton – looking to conserve their lead and their energy – lost some of the offensive fluency that had seen them dominate the first half. Tees Valley opened the quarter with four three-point baskets, and an ‘and one’ play to slice Brixton’s lead in half. With limited options available to him on the bench, Coach Powlesland was forced to keep faith with the same rotation that had taken Brixton this far in the game – and his players responded well. Toluwase continued to give the Mohawks defensive problems, and smashed home another huge contested dunk to seize the momentum back for the visitors to lead 58-45 after 3 quarters.

After Mohawks’ USA import player Michael Dodds left the game with what appeared to be a serious back injury, Tees Valley struggled to find any offensive rhythm and instead of making a run at Brixton’s lead, the hosts spent much of the fourth quarter on the receiving end of a one-sided quarter of basketball. Jon Gaymond showed some nice touches around the basket to rack up some points, and Uche Umweke’s offensive rebounding ensured Brixton controlled the game clock and the tempo of the game. In the last few minutes, Coach Andy Powlesland subbed in and hit a 3-pointer from the wing to roll back the years, some 26 years after his first senior appearance for the Topcats.

Coach Andy Powlesland: “that was a big win and I got a great performance from a very limited resource today.  We seem to have turned the corner in terms of form and whilst the injuries are still bothering us we are back to winning ways.  This all bodes well for the BUCS University Championships this coming weekend where London South Bank University have a
very good record in recent years.”

Dulwich recover from collapse with a winning start