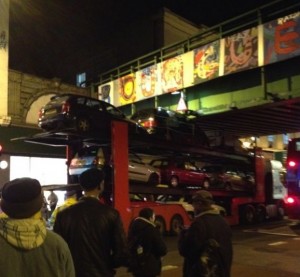 Brixton Road was closed for over 90 minutes after a car transporter carrying confiscated vehicles smashed into a railway bridge.

The lorry was carrying at eight cars seized as part of Operation Cubo, on Brixton Hill, when it became wedged just before 7pm on Thursday.

A spokesman for Lambeth police confirmed officers closed the road until 8.40pm. He added that the transporter’s driver was reported for driving without due care and attention and will be “considered for prosecution” by the traffic unit.

Train services on the Bromley, Brixton to Victoria line, under which the lorry became stuck, were not thought to be seriously affected.

No one was hurt during the incident, which attracted a number of bystanders.

Passerby Steve Wing took a picture (right) before taking to Twitter to say: “Brixton police round up illegal cars on Atlantic road, load onto car carrier & then crash into bridge. Classic.”