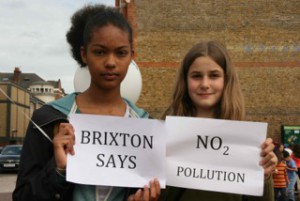 Brixton families and residents took to the streets over pollution last month as research showed that hundreds of local people are dying every year because of pollution caused by traffic.

Brixton has some of the worst air pollution in London. Levels of nitrogen dioxide (NO2) – which is linked to heart and lung disease – are much higher than the European Union (EU) standards.

The air quality monitoring station in Brixton Road recorded a whole year’s worth of NO2 in the first week of 2015 alone.

Last year the same site recorded average annual levels of NO2 nearly four times higher than the EU target – higher than in Oxford Street, Euston Road and the City. 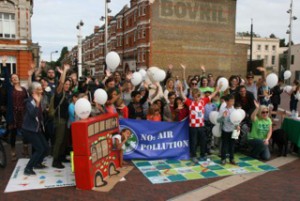 The protest took place a day after the government announced plans to meet European air quality limits – which were met with disappointment by environmental campaigners.

Critics said the plans would make councils responsible for policing pollution in urban areas without any extra money or new powers. The plans accepted for the first time that more than 50,000 people a year die from air pollution in the UK.

But Greater London will only comply with EU pollution laws by 2025.

The mayor has also announced plans for an ultra low emission zone, which will ban the most polluting lorries, buses and cars. But this will not come into force until 2020 and it will not cover Brixton.

Figures published by King’s College London based on research in 2013 showed that in Lambeth almost 200 people died in 2010 as a result of exposure to nitrogen dioxide.

Earlier this year, Lambeth councillor Jennifer Brathwaite launched a petition calling on the Mayor of London to operate only clean buses in Brixton and Streatham. 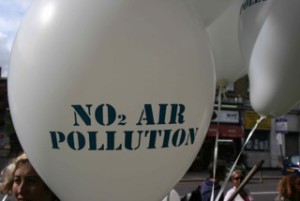 Local mum Janet Williamson said: “The pollution around here is really unpleasant. “I think it’s completely unacceptable that my son, who has asthma, is expected to stay in the house on days with high pollution.

“Surely there must be a better solution.”

One of the protest organisers, Bess Herbert, said: “If 200 Lambeth residents were being killed every year in road accidents, we would all know about it. But air pollution is a silent, invisible killer. We organised this walk to raise awareness and to call on the Mayor of London to take urgent action.

“We’ve been overwhelmed by the support we have received – many local people are concerned about the problem.”